With only ten months available between Bruce Farr’s first sketch of the KZ 1 in that hotel room to the actual race there was no time for revolutionary designs or tank testing. Bruce Farr and Russ Bowler used their accumulated knowledge to push the boundaries of what they already knew was possible from their hugely successful KZ 7 ‘Plastic Fantastic’ design.

The KZ 1 hull comprised a Nomex honeycomb coated with a wafer-thin skin of T800 carbon fibre. At only 1.37 inches (35 mm) thick it required an additional alloy frame within it to carry the imposed loads. Sections were very thin, with some parts of the mast as narrow as 0.12 inches (3 mm). Taking the KZ 7 evolution a step forward, the KZ 1 also had many world firsts – a mast 153.5 feet high made solely from composite materials and a 21 foot keel attached to a boat with a 14 foot beam.

The actual construction took 24 weeks under heavy security, for competitive reasons. The yacht was twice the length, three times the volume and one and a half times the surface area of KZ 7, yet had an almost identical weight. 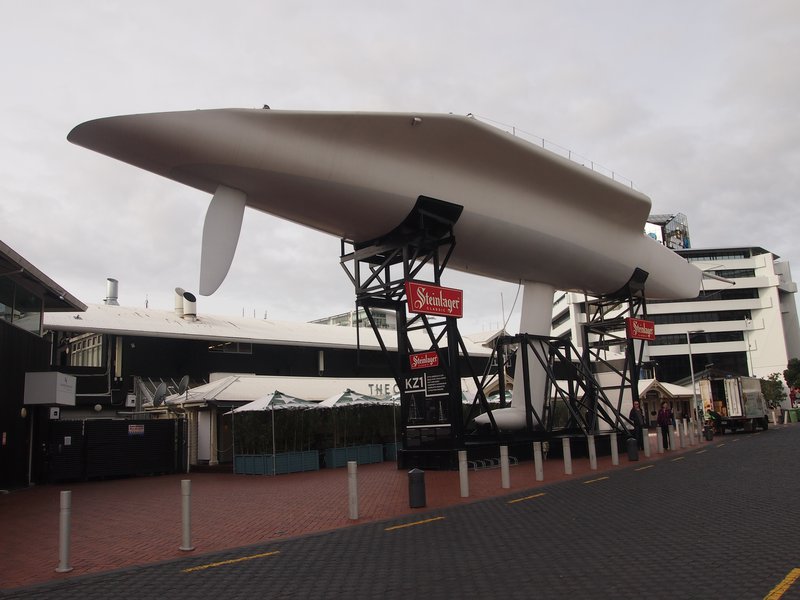 KZ 1 on display outside the New Zealand Maritime Museum, May 2015.

With a huge sail and a crew of 40, KZ 1’s centre of gravity had to be very low to stay stable. The design of the sail spars and masts became a crucial design point. The Yacht Research Institute at the University of Auckland investigated a rotating wing mast while Bruce Farr investigated more conventional spars, both aluminium and carbon fibre. Ultimately they chose a carbon fibre spar. So experimental was the constructed design that 48 strain gauges were attached to the rig and hull to assess stress exerted on the structure. To further lower the centre of gravity, the winches, and thus the eight Grinders, were placed below deck.

The San Diego Yacht Club’s (SDYC) response to the KZ 1 was a catamaran that won the sailing races and clinched the America’s Cup. However because the Deed of Gift stipulates that the defender must match the specifications of the challenger, a catamaran was against the rules. Ultimately the 1988 America’s Cup winner was decided in court.

Judge Carmen Beauchamp Ciparick so judged that the SDYC violated the spirit of the deed and was to be disqualified from the 1988 competition. She later awarded the cup to the Mercury Bay Boating Club (NZ) but this decision was overturned in 1990 by the Appelate Division of the New York Supreme Court. On 26 April 1990 it overturned Judge Ciparick’s ruling on the basis that the rules did not expressly exclude multihull vessels. SDYC were eventually crowned the winners of the 1988 America’s Cup. Interestingly the Chief Judge of the Appelate Division was arrested in 1992 by the FBI for blackmail and extortion.

KZ 1 was the fastest displacement monohull ever built, and given the time frame had very few failures for such an experimental design. The fallout from the 1988 America’s Cup prompted new simplified class rules for the cup and provided the impetus for a new design of ship for future cup races: It was, in essence, a point of revolution for global yachting.

The vessel is currently on display in association with the New Zealand Maritime Museum in Auckland.

This item of New Zealand’s engineering heritage was recognised as part of the IPENZ “Engineering to 1990” project which the Institution organised to help celebrate the country’s sesquicentenary in 1990. A plaque was unveiled to mark the significance of this yacht as part of the development of the nation.

When Craw died in 2007 his family became responsible for the collection, which is managed by Richard Easton (2013). A team of volunteers are maintaining and restoring collection items.

The yacht is in a static display within Auckland's Viaduct Basin which is a public area open all hours.