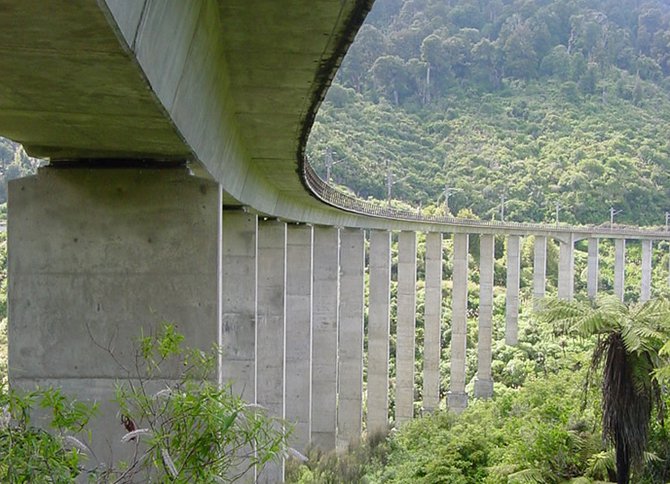 The new Hāpuawhenua Viaduct was completed in 1987 as part of the ten-kilometre Horopito-Ohakune Deviation on the North Island Main Trunk (NIMT) line. Designed by Beca Carter Hollings & Ferner Limited, and constructed by Fletcher Construction Company, the viaduct is longer and taller than its predecessor, at 414 metres and 51 metres respectively. It is built from reinforced and pre-stressed concrete, a more resilient alternative to the old steel viaduct.

Calls to replace the old Hāpuawhenua Viaduct were voiced as early as the mid-1960s. Concern mounted over the structure’s fatigue and locomotives were generally restricted to just 50 km/h when crossing the old viaduct. The new viaduct was part of the NIMT electrification scheme, which sought to cut travel times by up to 1 ½ hours, while also enabling a 50% increase in train loads. Crucially, the new viaduct has a 420 metre radius curve, compared to the old viaduct’s 201 metre curve, allowing speeds of up to 75 km/h. 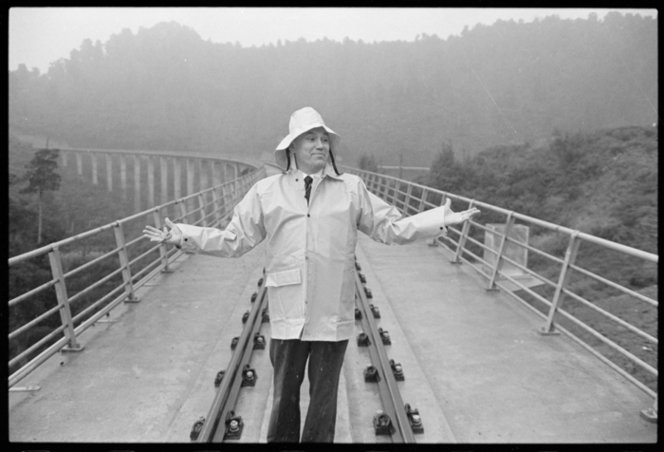 The old Hāpuawhenua Viaduct was built in April 1908 in the final stages of the NIMT’s construction. At 284 metres long, 45 metres high, and made of steel, the viaduct boasts five 19.5 metre Pratt trusses, thirteen 11 metre plate girders, and four similar girders over the steel pier heads. Today, the viaduct remains one of the oldest, longest, and tallest curved viaducts in New Zealand. 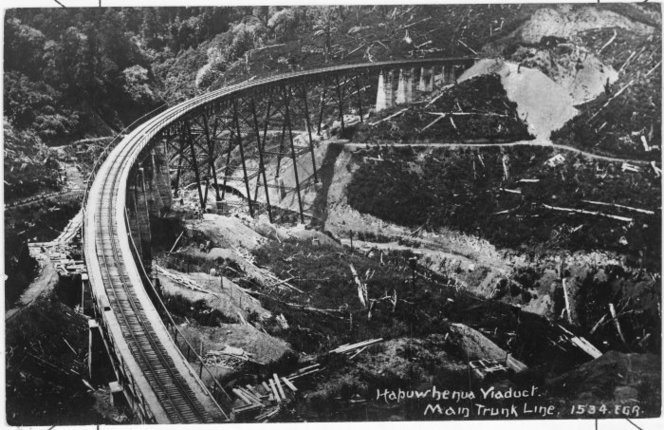 Working on the Main Trunk Line

Life working on the line was challenging, especially on the central plateau. The relatively-decent worker’s pay was offset by the high cost of living at such sites and the isolated lifestyle reportedly took its toll on the ‘navvies’ and their families who inhabited the surrounding rough timber and calico camps. As pressure to complete the NIMT mounted, an extra night-shift was added, the construction of the Hāpuawhenua Viaduct completed, at least in part, by lamplight. 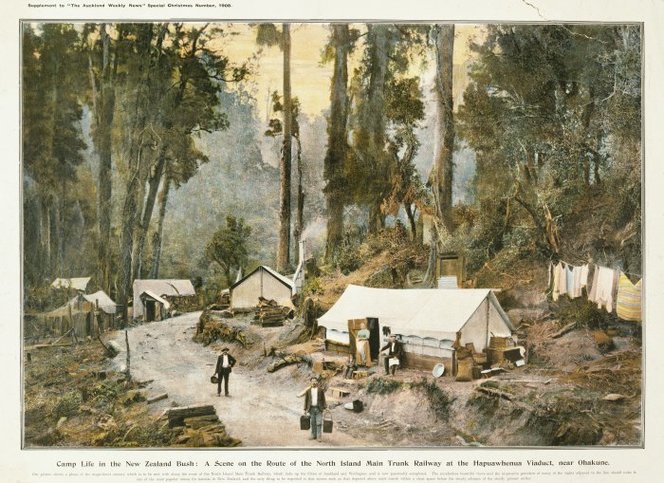 The viaduct was completed in April 1908, in time to be traversed by the Parliamentary Special, marking the first unbroken rail journey from Wellington to Auckland on the NIMT. Carrying a party of politicians, the service left Wellington on 7 August 1908 and arrived in Auckland 20 hours 30 minutes later.

The completion of the new Hāpuawhenua Viaduct in 1987 saw the old viaduct fall temporarily into disuse until it was repurposed as the site of the world’s first commercial bungy jumping operation, the brain-child of entrepreneur A. J. Hackett.

The old Hāpuawhenua Viaduct stood redundant for some 20 years until it was restored and re-opened as an extension of the Ohakune Old Coach Road walking and cycling track in 2009.

The new Hāpuawhenua Viaduct was recognised by Engineering New Zealand as part of the Engineering to 1990 project.

The old Hāpuawhenua Viaduct is part of the Ohakune Old Coach Road heritage trial and hiking track. The track is open to both trampers and mountain bikers.

For duration times and access directions, go to www.doc.govt.nz/parks-and-recreation/places-to-go/central-north-island/places/tongariro-national-park/things-to-do/tracks/ohakune-old-coach-road/