This bridge has a special pride of place in New Zealand but was designed and built by the Australian company, Ferro-Concrete Company of Australasia Limited. Upon its completion in 1910, Grafton Bridge was said to be the largest span reinforced concrete arch bridge in the world.

Grafton Bridge took two and a half years to build. When it opened in April 1910, it was claimed to be the reinforced concrete arch bridge with the largest span in the world. The twin, three pinned arches, spanned 320 feet (97.6 metres), rising 85 feet (25.6 metres) above the abutments and to a height of 142 feet (43.3 metres) above the valley floor. It was certainly a pioneering structure, being a very early use of reinforced concrete in New Zealand, and showing great engineering enterprise and brilliance of design. The structure is still a vital link in the street system of our largest city, carrying a solid stream of pedestrian and vehicle traffic, although heavy transport is excluded.

Two tenders were received by the Auckland City Council in 1907, one for a steel bridge from Messrs J. McLean and Sons, to be manufactured by the American Bridge Building Company for £28,730– 12s 6d – and the second for a reinforced concrete bridge costing £31,918. The recommendation from the new City Engineer, Walter Ernest Bush (1875–1950), was that the concrete design be accepted because ongoing maintenance costs would be much lower. The reinforced concrete tender from Ferro-Concrete Company was accepted. Mr RF Moore was their Chief Engineer, and Mr C Rosegger, the Chief Assistant Engineer, was responsible for making the calculations.

When construction started the timber falsework was massive, consisting of 400,000 super feet (943 cubic metres) of West Australian jarrah and Oregon pine. “The height of the moulds was adjusted most accurately by 160 bottle jacks, which performed their work more effectively than the sand boxes more generally employed” (Cassiers Magazine, August 1910).

The concrete was made of beach shingle, 6:1 mix, using local cement. Preliminary tests of the concrete were made by Professor Warren of Sydney and a design strength fixed at 500 pounds per square inch (3.4 megapascals).

However, all did not go well for the Ferro-Concrete Company. The site was difficult, being a steep-sided bush clad valley, and there was trouble with the complexity of the formwork and getting it in place. Late in the contract the company was declared bankrupt and therefore could not continue. The arch design was submitted to Professor Moersch of Germany and a clause in the contract stipulated that “...no progress payments should be made on the arch span till it is completed and tested”. This no doubt caused the downfall of the company. It meant that the construction of Grafton Bridge was completed by council labour. The final cost was £35,000, being an over-run of only £3,000 or 9.5 per cent.

Load tests were carried out on the newly-completed bridge. Firstly one half of the arch span was loaded with 292 tons of roading aggregate, giving 113.5 pounds per square foot (5.4 kilopascals), and the deflection measured as ⅛ inch (3.17 millimetres). However temperature movement was also significant. When the road metal load was removed, two steam rollers, of combined weight 32 tons, were run over the bridge and the deflection was measured as 1/12 inch (2.12 millimetres). “In all cases the results were extremely satisfactory...”. 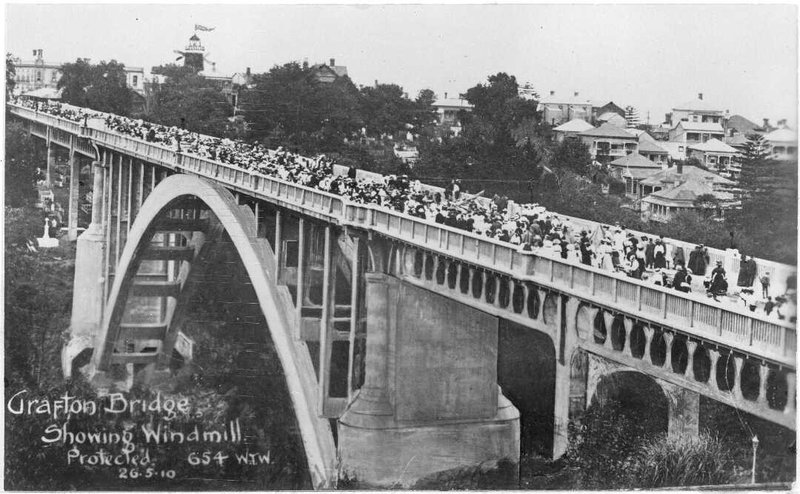 Maintenance and use of the Grafton Bridge

The recommendation of Mr Bush that maintenance would be very low was born out by experience: “the record of maintenance on the structure over a quarter of a century was excellent, being almost nil...”. However, in 1936 some cracks that had been under observation for some time became worse and “a considerable piece of concrete became detached and fell away from the bottom chord... of the span adjacent to the main arch at the Grafton Road end.”

The problems seem to have arisen because of the nature of the spans flanking the main arch. These 3 spans of 35 to 42 feet (11 to 12.8 metres) and 6 spans of 75 to 80 feet (23 to 24.4 metres) were made from concrete Vierendeel girders with a top and bottom chord and vertical posts, being 9 feet deep. Their appearance was of a number of square openings with big chamfers at the corners, and the end openings, adjacent to the supports, were filled in.

A detailed study demonstrated that the shear stresses in these Vierendeel frames was excessive and there was surprise that the structural performance had been so good. The remedy was to erect two steel trusses on the deck to support the damaged area and to fill in the openings with concrete, with special emphasis on the shear reinforcement, thus turning the frames into large I section beams.

Since the 1930s maintenance and repair works have been of a minor nature associated with the ravages of time, such as cover to steel on beam edges. Repair details are given in a paper (circa 1938) by AJ Dickson, City Engineer and President of New Zealand Institution of Engineers (now the Institution of Professional Engineers New Zealand (IPENZ)).

At its centenary, Grafton Bridge spanned motorway lanes in Grafton Gully, standing tall over the modern system. It is still giving good service and is anticipated to keep doing so for many years to come.

This item of New Zealand’s engineering heritage was recognised as part of the IPENZ “Engineering to 1990” project, which the Institution organised to help celebrate the country’s sesquicentenary in 1990. A plaque was unveiled to mark the significance of this place as part of the development of the nation.

The bridge is a public road and has pedestrian access.  Access to view underneath can be made through the Symonds St Cemetery.