The Tasman pulp and paper mill

The Tasman pulp and paper mill at Kawerau was one of New Zealand’s greatest industrial achievements. It was described by Jack Smith as ‘…the greatest feat in industrial engineering construction in New Zealand,’ and notable because ‘[t]he scale of this project was big by international standards and the paper machine when installed had, at that time, the largest capacity in the world.’ 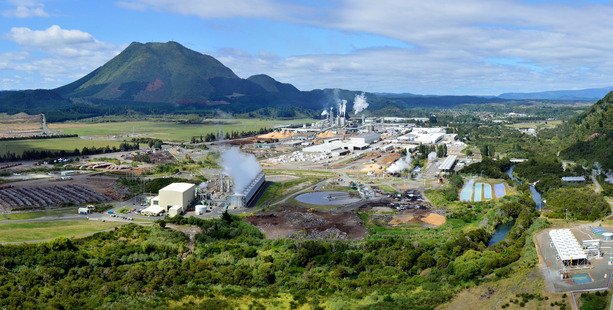 From 1925 the pine plantations on the Kaingaroa Plains were the basis of New Zealand’s pulp and paper industries. Early plantings around Waiotapu, using prison labour from 1901 to 1912, were planted at a rate of 300 to 500 acres (120 to 200 hectares) per year. But in 1917 a camp was established for returned servicemen and planting rates increased to an average of 1500 acres (607 hectares) per year. In 1924 the State Forest Service invited British engineering pulp and paper machinery consultants, Walmsleys (Bury) Ltd to advise on uses for the desolate land of the Kaingaroa Plains. They sent William Anderson who recommended large scale plantings of pine trees that could create a pulp and paper industry capable of competing in world markets. State Forest Service Director, Leon MacIntosh Ellis could see that the country would face a timber shortage by the 1960s and proposed a 10 year programme to plant 300,000 acres (121,406 hectares). From 1928 to 1936 up to 1500 unemployed men from the depression years were engaged in planting, in addition to forest service workers. Planting on the scrub land was relatively easy and the rapidly growing radiata pine was easily germinated. By 1935 the Kaingaroa State Forest was 259,147 acres (104,873 hectares), one of the largest man-made forests in the world. It produces the world’s largest wood growth of 23 million cubic feet (622,970 m3) per year.

After extensive testing and trials by the forest service it was determined that New Zealand-grown pine could make pulp equal to that of Canada or Scandinavia. By 1951 the government was ready to offer timber from the Kaingaroa Forest for sale by tender. It was J C Fletcher (later Sir James), second son of the first Sir James Fletcher, who decided that Fletchers should be involved in the pulp and paper industry, even though there was opposition from the government. The only proposal for a pulp and paper mill submitted by the due date in November 1951 was Fletcher’s, with a total estimated cost of £14,800,000 against the New Zealand Forest Service estimate of £13,340,000. The government had offered to contribute £450,000 (15% of the capital) and Fletchers proposed £700,000, leaving £1,850,000 to be raised from public and private investors. The original proposal was for the mill to be built at Te Puke on the Kaituna River rather than the government’s preferred site at Murupara. The government had already let tenders for the earthworks to construct a railway from Edgecumbe to Murupara and it was a condition of the Fletcher contract that the government would construct a new wharf at Mt Maunganui. The government was not happy with the Te Puke site and recommended a new site with geothermal steam near Te Teko, which became Kawerau.

Although there was urgency for the mill to be built because of the maturing Kaingaroa Forest, there were many delays caused by disagreements between the government representatives and Tasman Pulp and Paper Ltd, the new company formed by Fletchers. It was not until July 1953 that the mill site was surveyed and foundation work commenced. The first paper was produced in October 1955, a substantial feat considering the complexity and scale of the plant, which had the largest capacity of any in the world at the time.

There are many complex processes involved:

The original mill was owned by the Fletcher established company Tasman Pulp and Paper Ltd. In 2000 the mill was sold to Norske Skogindustrier ASA of Norway, and in 2001 it passed ownership of its chemical pulp operations and business on to Carter Holt Harvey Ltd. In 2005 Rank Group Investments Ltd, controlled by New Zealand's richest man, Graeme Hart, took ownership of the Tasman mill along with the Kinleith paper mill.

In 2014 the Tasman, Kinleith and Penrose paper mills were sold to Japanese company Oji Fibre Solutions, one of the largest paper manufacturers in the world. It produces a range of kraft market pulps for use in the manufacture of various papers, boards and specialty products, together with containerboard for conversion into corrugated cases. It services customers globally from three New Zealand paper mills.

Norske Skog retained the operation of the mechanical pulp mill and newsprint mill. The company is a manufacturer and supplier of directory, newsprint, improved newsprint and book paper products to publishers and print media organisations in New Zealand and overseas.

Tasman is located 2 km outside the town of Kawerau, Bay of Plenty, off State Highway 34.