Located by an unusually consistent reserve of high-grade limestone, the cement works at Portland (near Whangarei) is the largest and most modern in New Zealand. The original cement works opened in 1913 and upgrading to a “dry” process commenced in 1983. 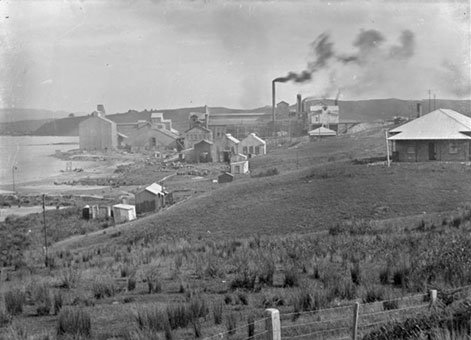 In 1912, William Wilson, recently retired from Wilson’s Portland Cement Company (WPCC) founded by his father, noted a large hill of limestone near the Oakleigh River and decided it would be a good place for a cement works. Furthermore, it was close to the new Auckland railway route. Wilson then formed the Dominion Portland Cement Company (DPCC) with George Winstone. After visiting suppliers in the United States of America, England and Europe, they imported the most up-to-date machinery and established a new plant at Portland, not far from Whangarei Harbour’s Limestone Island.

To drive all the machinery at the works, DPCC secured the right to develop the Wairua Falls power station where they installed equipment to deliver up to 2,000 kilowatts. Surplus electricity provided power to Whangarei and surrounding districts. Its modern plant meant the DPCC was able to produce cement more efficiently than rival companies. 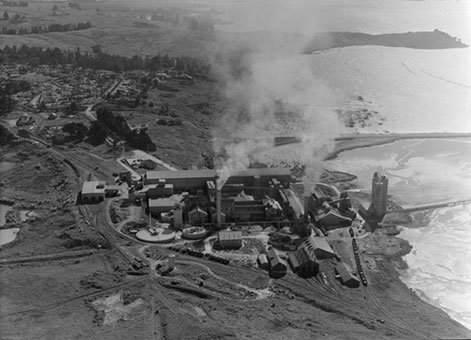 Big changes in the mid to late 20th century

Extensive additions were made to the Portland plant in 1953. Its former annual 100,000 tonne capacity was doubled by constructing a new gantry building, crusher house, two cement silos and a slurry basin. Two years later output was increased further, to 250,000 tonnes per annum, because of a new kiln. This expansion continued and by 1966 there were six kilns operating. The capacity was 460,000 tonnes per annum using the “wet” process. Using this process cement rock (an argillaceous marl) and limestone rock were ground to a fine powder in the form of a slurry.

However, the energy required to dry the slurry prior to kiln firing made the “wet” process relatively uneconomic. As a result, in 1983 the “dry” process was introduced to the “Number 6” kiln, with earlier kilns being scrapped or mothballed. With capacity of 430,000 tonnes per annum, the energy consumption was almost halved by moving to a “dry” process. New crushers and cement silos were built. This upgrade work was designed by Gatx-Fuller, the same company that completed the original plant. The construction was undertaken by local contractors Whangarei Engineering Company Limited and Wilkins and Davies.

This was a sophisticated engineering project and the Portland works’ conversion to the “dry” process made it one of the most efficient plants in the world for its size. In 1995 X-ray fluorescence laboratory quality control was installed and a high level process logic control computer system was introduced increasing capacity to 600,000 tonnes per annum. In 2003 the direct coal-fired milling and firing system was changed to duo-fuels burner systems, using pulverised coal and alternative fuels such as pulverised wood waste or liquid fuels. These initiatives further improved efficiency and reduced the impact on the environment.

In the late 20th century the ownership of the works was also changing. In 1970 Wilson’s became part of Golden Bay Cement owned by the Winstone Group. The company was purchased in 1988 by Fletcher Building Limited, but its brand name remained Golden Bay Cement. In 2009 New Zealand's cement production was 1.43 million tonnes, with 930,000 tonnes coming from Golden Bay's Whangarei operation.

Not open to the public.