The expansion of steel making at Glenbrook to 750,000 tonnes per year involved a five-fold increase in primary ironsand concentrate usage from 250,000 tonnes annually to over 1,500,000 tonnes. This made it impractical to use the existing road transport over the 18 kilometres between the Maioro mine site and the works at Glenbrook.

Prefeasibility studies were carried out using different transportation methods including aerial ropeways, conveyors, pneumatic capsules, railway, and a slurry pipeline. During this process the slurry pumping alternative, of New Zealand Steel’s Taharoa experience, was initially ruled out. A detailed world-wide search confirmed that the parameters of particle size, density and abrasiveness of the slurry concentrate grains, together with the volume to be transported and the distance, exceeded by far those of any other slurry pumping system. 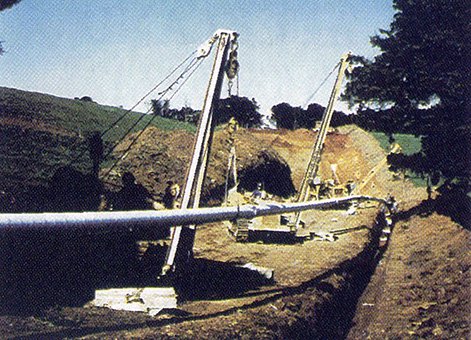 Rail was chosen as the most economical alternative. Negotiations continued with New Zealand Railways and an environmental impact report was prepared. Pressure from the farmers along the proposed rail route caused the company to reconsider the slurry pipeline option resulting in conceptual tenders being called for a turnkey contract.

A unique feature of the project was the formation of a study group comprising the client and the successful tenderer to decide the most appropriate parameters and then the optimum system. The resulting scheme included:

This item of New Zealand’s engineering heritage was recognised as part of the IPENZ “Engineering to 1990” project which the Institution organised to help celebrate the country’s sesquicentenary in 1990. A plaque was unveiled to mark the significance of this pipeline as part of the development of the nation.

Public tours by arrangement with the company.