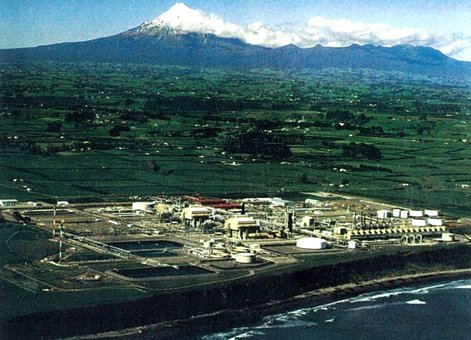 The Synfuel plant took natural gas from both the offshore Maui, and the onshore Kapuni gas fields and converted the combined gas feed first to methanol, and then to synthetic gasoline via the Mobil Methanol-to-gasoline (MTG) process. The plant produced a premium unleaded gasoline blendstock suitable for use directly in the transport fuels market.

At the time of its completion, the total annual production from the plant was equivalent to about one third of the New Zealand gasoline market. When combined with the production of condensates associated with the offtake of Maui and Kapuni gas, plus the use of compressed natural gas (CNG) and liquefied petroleum gas (LPG) as a fuel, New Zealand achieved almost 50 per cent self-sufficiency in petroleum products.

The creation of the Synfuels plant was part of a significant shift from the situation in the early 1980s when New Zealand was 85 per cent dependent on foreign oil. The Synfuel plant played an essential part in supplying the New Zealand petroleum market, contributing directly to reducing New Zealand’s vulnerability to uncertainty in imported crude oil supply.

Operation of the plant represented the successful conclusion of a major engineering task and the demonstration of a first-of-a-kind application of zeolite catalyst technology. The project was also notable because it demonstrated the application of engineering design methods to reduce the environmental impact of noise.

The Synfuels plant was also the first to apply seismic design in accordance with recommended criteria laid down for petrochemical plant. This included continuous dewatering of a saturated sub-strata sand layer to reduce the likelihood of site liquefaction under a severe earthquake.

The construction and ongoing operation of the Synfuel plant received international and national engineering interest, and brought into focus the competency and capability of New Zealand’s engineering resources as a result of the project being completed within budget and on schedule.

Methanol has been produced at the site since 1999. This is exported or blended with other fuel stock for use within New Zealand.

This item of New Zealand’s engineering heritage was recognised as part of the IPENZ “Engineering to 1990” project, which the Institution organised to help celebrate the country’s sesquicentenary in 1990. A plaque was unveiled to mark the significance of this synthetic fuels plant as part of the development of the nation.

The visitor information centre at the plant is open daily