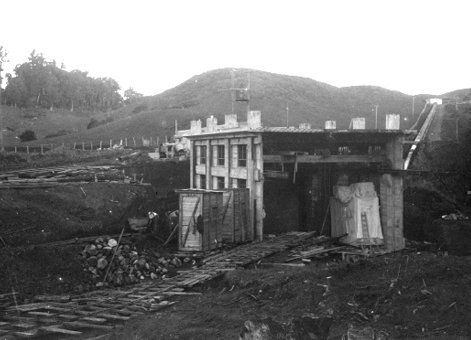 A scheme for Motukawa Power Station was devised by HR Climie of Messrs Climie and Sons and was adopted by the original owners, the Taranaki Electric Power Board in April 1923. The Board also adopted the proposal of its consultant to purchase a tunnelling machine from Sir William Arrol and Company of Glasgow, Scotland.

The rock to be tunnelled was papa with a tunnel diameter of 2.13 metres (m) and a length of 2,875m, starting from a surge chamber excavated in the hill above the penstock slope at the downstream end. The machine arrived in New Zealand in January 1924 but could not commence tunnelling until September 1924 due to faults in manufacture and supply of cutters, which were ultimately replaced with cutters made in New Zealand.

Initial progress in grey papa was good at 1m per hour, including all stops, with a maximum advance of 1.5m per hour. However, boulders were soon encountered. These slowed progress as they required hand excavation and sometimes occurred every 1.5m. The largest boulder was 7.6m long.

Machine tunnelling continued until 2,080m of the tunnel had been excavated in November 1925. At this point the ground conditions had changed to a silty material and several cave-ins occurred. Further work on the tunnel was carried out by conventional means using heavy timbering, the overlying country being swampy. The part of the tunnel in rock was gunite lined and the remainder concrete lined.

A shaft was constructed to allow the removal of the tunnelling machine which was accomplished by May 1926. The tunnel excavation was completed in August 1926. The Board offered the tunnelling machine for sale. Some auxiliary equipment was sold (cement gun and air compressor) but the machine itself was used as a source of parts for other operations of the Board so that no recognisable parts remain.