The Hutt Estuary Bridge, completed in 1954, was New Zealand’s first substantial bridge with a prestressed concrete superstructure. At the time of its construction this road bridge was widely regarded as a significant New Zealand engineering project. 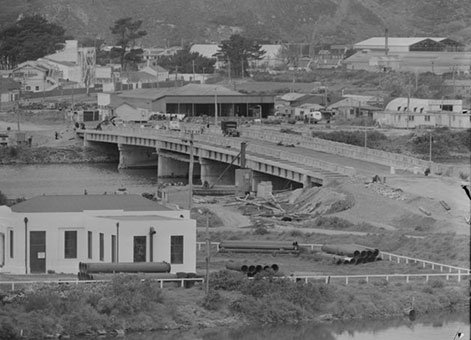 The structure was designed in the early 1950s by consulting engineer, WG Morrison (d.1983). This followed a decade of debate about what to do with the existing Hutt Pipe Bridge (1912), which was deteriorating and becoming increasingly incapable of carrying required traffic loads. This early bridge was eventually demolished upon the completion of the Hutt Estuary Bridge.

In 1943 the Engineer-in-Chief of the Public Works Department, William Langston Newnham (1888–1974), organised a working group of local council engineers to try and formulate a plan. In the following years many proposals, including strengthening the 1912 structure, were put forward. However, it was not until 1951 that definite progress was made as a result of the Lower Hutt and Wellington City Corporations, Petone and Eastbourne Borough Councils, and Hutt County Council agreeing to divide the cost of a new bridge. The Government also made a financial contribution.

Initially, several options were considered for the bridge, including typical reinforced concrete and steel truss structures. However, Morrison managed to convince the local bodies that prestressed concrete would be suitable on economic grounds. A prestressed concrete bridge could be constructed relatively quickly, and this type of structure had low flood risk and maintenance costs.

Internationally, prestressed concrete construction was still in its infancy, with the first major practical applications being made in France by Eugene Freyssinet (1879–1962) from the mid-1930s. After the completion of the Hutt Estuary Bridge it was noted that this fact made the acceptance of Morrison’s preferred option quite remarkable. His task in convincing the various local bodies of the prestressed concrete option was seen as a feat in itself, especially considering the Petone and Lower Hutt councils, in particular, were known for rarely agreeing on anything.

Because it was the first large prestressed concrete bridge in New Zealand, Morrison sought overseas advice when designing the Hutt Estuary Bridge. His assistant, G Cooper, travelled to England on a scholarship to work in the London office of Stressed Concrete Design Limited. Then, with Cooper’s input, the design for the bridge was done in Wellington before the drawings were then sent to London for final checks.

Using prestressed concrete also meant a new approach to the design and construction phases of the project. Morrison noted with a standard reinforced concrete bridge the designer was largely able to leave the practical aspects of construction up to the contractor’s discretion. However, because major components of prestressed bridges were prefabricated this required more upfront planning on the part of the designer. It also meant a closer collaboration with the contractor than would have been expected previously because of practicalities needed to be organised from the outset.

The Hutt Estuary Bridge is a two-lane road bridge consisting of five 32 metre (m) spans and 9 m approach spans at each end. It was designed with a pedestrian walkway on the south side, and on the opposite side a serviceway carrying water pipes, and other services, across the Hutt River. The bridge’s marginally parabolic form was a design feature to allow for required flood clearances.

The contractor, Wellington’s Wilkins and Davies Construction Company Limited, had little difficulty building the first piers. However, Piers 1 and 2 required caissons. For Pier 1 an artificial island was built-up for the reinforced concrete caisson. This proved efficient, however, another even quicker approach was tried on Pier 2. ED Kalaugher, supervisor of the contractors, suggested using a floating steel shell as a caisson. Because it looked like a tin boat and was made by Messrs Hume Industries, this caisson was nicknamed HMS Hume.

There was also some trial and error in handling and positioning the prestressed beams. Several different methods were tried. In one instance the “beam which was being towed virtually exploded under the release of the prestress, and in doing so ‘touched off’ another beam…[this] also broke into fragments” (Morrison, 363). Eventually mechanical means and steam winches were used to get the beams to the river bank. An initial idea of floating the beams out and positioning them with the aid of the tide was planned. However, when tried it was discovered that there was insufficient water for this approach. Therefore, an access bridge was built alongside the Hutt Estuary Bridge to aid the positioning of the beams.

The construction of the Hutt Estuary Bridge was very much a learning process because Morrison and the contractors had no prior New Zealand projects to use as a model. The project was perhaps best summed up by the foreman in charge of positioning the beams when he said, “[t]his has not been a job; it has been an adventure and a challenge” (Morrison, 375).

The bridge is available for vehicle and pedestrian use at all times. Good viewing points are available from the walkway on the east bank of the river.