Locals called the Denniston Incline the eighth wonder of the world. Opened in 1879, this South Island railway transported coal from the precipitous Mount Rochfort Plateau to Denniston, a fall of 518 metres (m) in a track distance of 1670m. 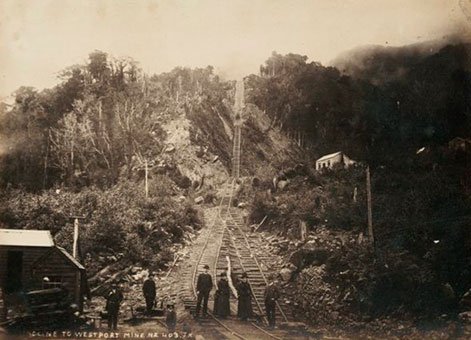 Built for the Westport Colliery Company, the Denniston Incline involved a daring use of railway wagons. Between 1879 and 1967 they carried over 13 million tonnes of coal destined for the ships at Westport.

Work commenced on the incline itself in late 1878, and at the end of the year tenders were called for construction of the bridge over Conn’s Creek near the foot of the incline. This bridge was constructed with two laminated arches with a span of 115 feet (ft). These arched ribs were built up of ironbark laid in nine thicknesses measuring 17 inches (in) by 10in with heavy paint between them. The crown of the arch was 30ft above the creek with the roadway a further 12ft higher thus making the decking 42ft above the water level. The 40 pound (lb) rails were laid on 7ft sleepers, and the width of the bridge in the clear was 10ft.

Across the bridge a timber viaduct alongside the spur carried the rails onwards and upwards towards Denniston on grades as steep as 1 in 1.25 (80 per cent). At the Middle Brake, where trucks were exchanged between the Upper and Lower Inclines, the grade flattened out to 1 in 120 (0.83 per cent), but once across Brown’s (or McDonald’s) Bridge and up the upper incline it was as steep as 1 in 1.69 (59 per cent) for a short distance. 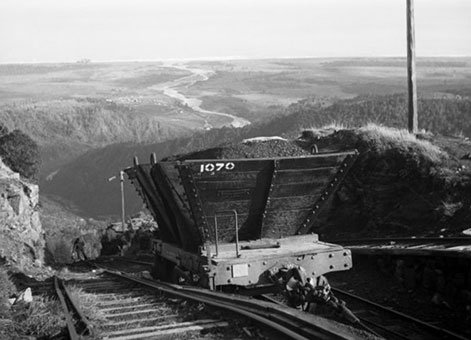 From the bins and screens at Denniston to the foot of the incline at Conns Creek the fall was 1,700ft in a track distance of 83 chains (ch). The upper incline was 33ch long with a vertical fall of 830ft. The lower grades associated with such a drop necessitated a form of control capable of handling wagons weighing at least 12 tons fully loaded.

The braking system adopted resembled a direct-acting horizontal winding engine, but the action was directly opposite. Water was used to check the action of pistons, instead of steam to give them motion. The water was drawn off at each stroke and replaced by a fresh supply, as the severe pressure would raise it to boiling point. There was also a very effective strap brake around the raised centre of the drum that could be used in emergency or when bringing a load to a stop. It could be wound up tight by the brakeman for this purpose.

The actual system for working the incline was that of a counter-balance, whereby the descending full wagon pulled the empty one up. Four-inch circumference steel wire rope was used, and the rails were laid so that the wagon ascending on the right or “company” side of the line was wound around its side of the drum while the rope on the other or “donkey” side unwound and let the descending wagon down the incline. For the next load the procedure was reversed. 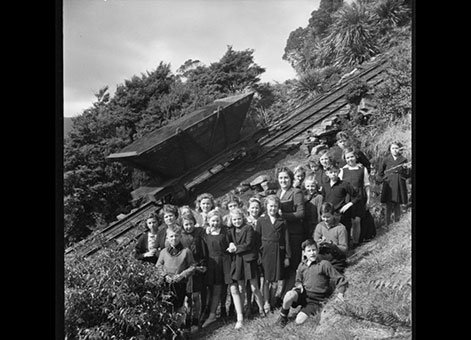 The building of the screens and bins at Denniston was the next step, as was the construction of the 2ft gauge horse tramway to the coal face at the Banbury Mine. This 28-chain double-track had a grade of 1 in 120 in favour of loaded skips.

By the end of 1882 the output of the Banbury Mine was 24,198 tons for the year, and it continued to increase each year. There was talk of working the incline at night in order to cope with the enlarged output and increasing orders, but this was not possible until RB Denniston’s patent indicator was fitted to the brake drums. This piece of equipment could be fitted to the end of the brake drum shaft and connected to the indicator by bevelled gears. These gears in turn worked a vane that moved up or down the indicator board, thus informing the brakeman where the truck, which was often out of sight, was located on the incline. Greater safety was ensured by this device and, with a lantern hung on each wagon, night work was possible.

Initially ordinary New Zealand Railways wagons or trucks were used to carry coal from the Denniston bins to Conn’s Creek and the shipping at Westport, but later some of these were fitted with fixed hoppers to make it easier to unload the coal. Eventually the “O” class fixed hopper wagon came into use, followed in 1897 by the first “Q” class removable hopper. “L” class highside four-wheel wagons were also used.

Just prior to the mine’s closure, the National Film Unit filmed the coal mining process at Denniston and the incline in action in Pictorial Parade No. 195 in 1967.

This place has been recognised by Heritage New Zealand as a Category 1 historic place (List no. 7049):

This item of New Zealand’s engineering heritage was recognised as part of the IPENZ “Engineering to 1990” project, which the Institution organised to help celebrate the country’s sesquicentenary in 1990. A plaque was unveiled to mark the significance of this coal transport system as part of the development of the nation.

Denniston is managed by the Department of Conservation and access, as well as other, information is available on their website

Denniston is inland from Waimangaroa on the South Island’s West Coast. Waimongaroa is 15 kilometres north of Westport on State Highway 67.