In Waikato dairy country, an algorithm is changing how farming is done. It’s where the paddock meets coding – and Silicon Valley’s interested.

New Zealand has a strong legacy in farming innovations. The milk meter, the automated milk system and electric fencing for livestock control were all dreamt up by Kiwis and helped revolutionise farming.

The innovations continue and are being increasingly recognised. San Francisco-based Startup Genome, an organisation that benchmarks start-up communities globally, says New Zealand is one of four places to watch for agritech solutions in 2018, alongside Silicon Valley, Boston and Amsterdam.

One company providing these innovative solutions is Halter, whose technology allows dairy farmers to remotely control and track their herds. The agritech invention, dubbed the “cowgorithm”, is a GPS-enabled collar that fits around a cow’s neck. It uses artificial intelligence to self-herd stock around the farm while gathering data about a cow’s behaviour, emotional state and health. And it’s all linked up to a farmer’s phone.

The idea behind the technology is “fenceless farming”, explains Halter’s Chief Executive and founder, Craig Piggott.

“It’s about making a farmer’s life easier. If you can somehow remove the need for a post, a wire, a gate or a dog to control cows, you can really start to change things.

“When you train an animal, you need to be patient, very repeatable and consistent – these are all things software is really good at, and humans are bad at.” 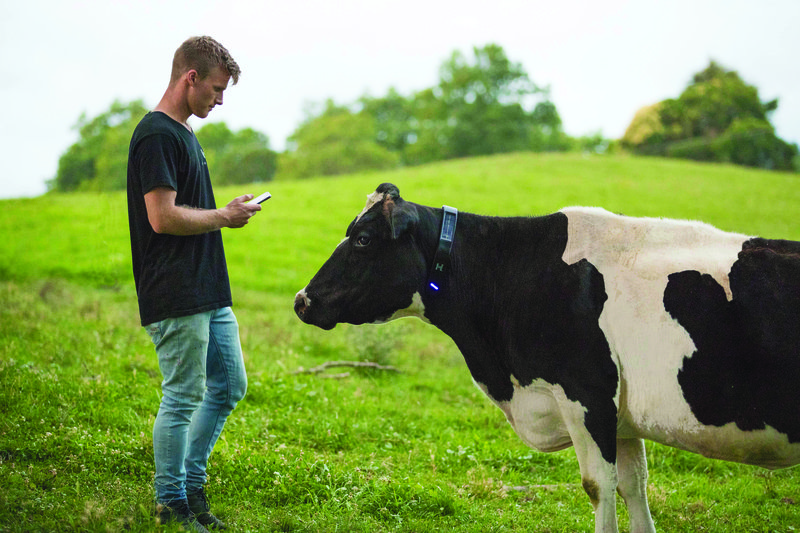 In much the same way as cows respond to a human voice, or a dog’s bark, the device works by sending cues, such as warning sounds or vibrations, to control an animal’s movements. It means farmers can manage their herd from their phone or tablet, doing everything from guiding stock between paddocks, detecting cows showing signs of poor health, or moving individual animals out of harm’s way.

“If you’re a farmer with 1,000 cows, it’s really hard to know what’s happening with each of them. Putting a device on every cow, we know straight away whether one’s acting strangely.”

Craig says the technology can even help prevent the spread of Mycoplasma bovis by not allowing animals within a couple of meters of a boundary fence, stopping cow-to-cow contact between farms.

Craig came up with the idea while studying mechanical engineering at the University of Auckland and working part-time at Rocket Lab. He’d grown up on a Waikato dairy farm, so had a fair understanding of the sector.

“The biggest single problem on any dairy farm today is labour,” Craig says, adding it’s a really tough job and the pathway from coming in as a farm worker to farm ownership is bigger than ever.

“To a lot of people, when you start out working 80-hour weeks on a farm, that pathway almost looks impossible and the incentive to work really hard drops off. Farmers also find it hard to recruit good labour.”

When you train an animal, you need to be patient, very repeatable and consistent – these are all things software is really good at, and humans are bad at. – Craig Piggott

Because so much of dairy farming centres on controlling or guiding the location of a cow, Craig saw the enormous potential for software to solve the problem.

“The value proposition is we can give back hours of a farmer’s day so they don’t have to walk behind the cow. We can do a huge amount of their day-to-day work for them. They can wake up in the morning and the cows are already at the milking shed.”

Craig did his research, talking to farmers around the North Island and using his family's farming contacts before raising the capital to develop the technology. Relatively early in the piece, his boss at Rocket Lab, Peter Beck, came on board as an investor.

Peter sits on Halter’s board and Craig describes him as an invaluable mentor who has taught him so much.

Halter has been growing exponentially in two short years. There are around 25 staff and counting, including engineers, scientists and animal behaviour experts. The company operates out of headquarters in central Auckland and has a development farm near Morrinsville where technology is tested.

Still in his early 20s, Craig and the rest of his mostly young staff are keen to invest a large chunk of their careers into the venture with the hope it becomes a massive, global company.

“We’d all be pretty disappointed if we become a Waikato success story but that’s it.”

This year, Halter raised $8 million from Silicon Valley-based Data Collective. The money will be used to commercialise the devices.

“We’ve proven the tech could work. Now the priority is taking everything we know that works, and we’ve seen it work on our development farm every day, and scaling it. We’ve been taking pre-orders for sign-ups of pilots on other people’s farms, so we’re just arranging the manufacturing of these devices.”

The devices need to be easy to manufacture and able to last for several years out in the open on the farm. This means classic engineering challenges: durability and reliability. Craig says the company has recently started building the devices in China. The next step is real life usage.

“The expectation is we’ll be rolling this out on a bunch of farms early next year.” 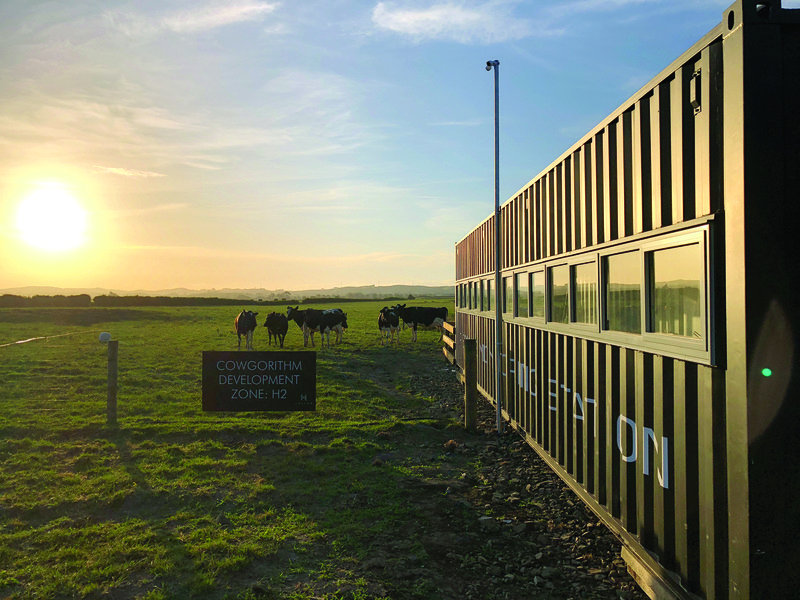 Halter's development base located on their pilot farm in Waikato. Credit: Halter.

“The rebirth of agriculture”

It’s not just dairy farms benefiting from agritech innovations. With a bachelor’s degree in natural resource engineering and a master’s in agricultural engineering, Matt Flowerday founded GPS-it 17 years ago.

The Tauranga-based GPS mapping company’s first clients were kiwifruit orchards but it has since grown into a major software development provider that services the agricultural and horticultural industries in New Zealand and internationally.

It’s now forming partnerships with a major player in Silicon Valley and looking to tailor its technology for the United States.

Matt says these are exciting times for agritech.

“We’re seeing the rebirth of agriculture.”

He says there are many ways new technology is continuing to improve farming practice, along with the big opportunities that exist for Kiwi innovators who want to expand into much larger markets like the United States.

However, as technology continues to evolve, there is a need for common platforms.

“With the likes of Halter, what they’re doing is map-centric, so how do we provide the ability to share the various information on other applications?”

He says whereas in the past, agritech companies would have worked in isolation, today it’s all about collaboration.

“Historically, there’s always been multiple offerings of different software applications that all work independently. Now, there’s a real appetite within the agritech community to be more open and work together to provide better information sharing, complementary products and a common platform – which can only benefit the farming sector.”

What do farmers think?

Vice-President of Federated Farmers Andrew Hoggard farms around 560 cows in the Manawatu and says he sees many farmers taking advantage of the efficiencies technology is creating.

“Most farmers, particularly those of the next generation, are open to using new technology and see its usefulness in terms of cost and time savings.

Take a water system on the farm, for example.

“If you’ve got a broken trough, the first thing you’ll notice is you’ve got no water because the tank’s empty. Then you rush around trying to fix it, followed by several days trying to play catchup.

“But if you’ve got technology that’s monitoring water flow, you can diagnose the problem and get onto it before something breaks, saving you a huge amount of time.”

A big challenge for farmers is connectivity, he says. Much of what’s on offer relies on cellular coverage, posing problems for farms that are out of range.

“We all run various computer programmes and it feels like you put the same data into half-a-dozen different platforms. If you’re going to invest in hardware on your farm, you want it to all be able to work together.”

This story originally appeared in EG magazine. To subscribe to EG, email hello@engineeringnz.org 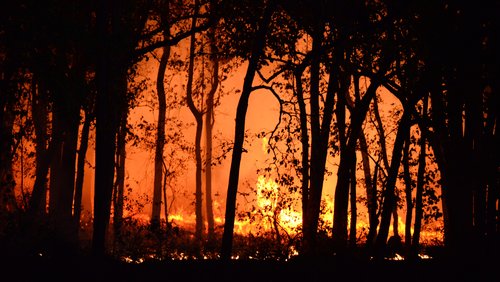 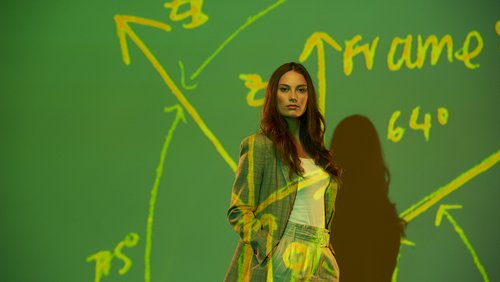