The Makohine Viaduct is an impressive engineering achievement. Its was one of many viaducts designed by engineer Peter Seton Hay (1852–1907) in the central part of the North Island Main Trunk (NIMT) railway. The Makohine Viaduct overcame the first major natural obstacle to the NIMT’s completion, spanning a bush-clad gorge, approximately two kilometres (km) south of Ohingaiti. 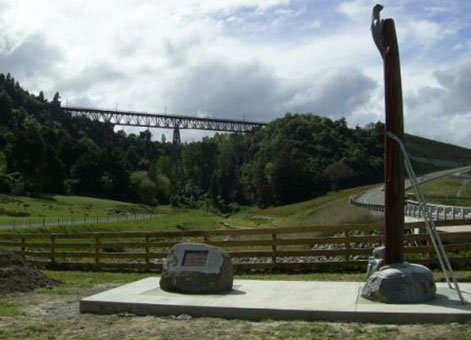 In 1870, earnest planning began for a railway to connect Auckland and Wellington, the two main centres in the North Island. However, the topography of the central North Island caused a headache for surveyors and Public Works Department (PWD) engineers trying to finalize a route. In 1887, the railheads stood just south of Te Kuiti and at Marton. Conquering the difficult terrain would involve various earthworks and tunnels, bridges and viaducts. 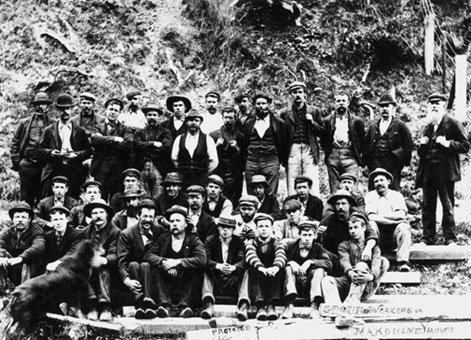 The Makohine Viaduct was constructed across the 228 metres (m) of bush-clad Makohine Stream valley. Built between 1896 and 1902, the Makohine Viaduct project suffered numerous delays due to soil conditions, flooding, inclement weather, and a steel strike in England. However, the experienced engineers and builders involved in its construction, such as Alexander Buchan (1845?–1905), George Leslie Cook (1851–1942), Samuel John Harding (1861–1948) and Walter Sneddon (1837–1925), had to persevere, under considerable pressure from the public and the Government, in order for the NIMT to progress.

The steel was eventually fabricated in the PWD’s nearby Mangaonoho workshops. These were located on Ironworks Road and fabricated the steel for many NIMT construction era bridges which followed the Makohine Viaduct. The Makohine Viaduct was under the co-operative system. This was the one of the first major PWD projects in New Zealand to be started under a directive to favour this approach to construction, and it was subsequently used on much of the rest of the NIMT. 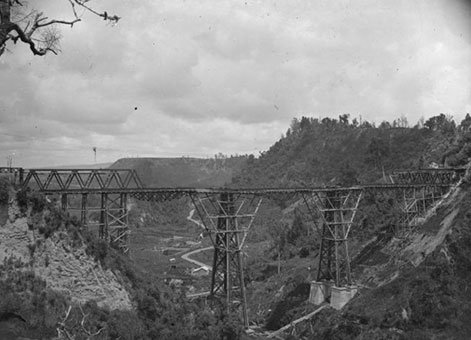 At 72 metres (m) high the Makohine Viaduct was, when completed, the tallest viaduct in New Zealand. Subsequently overtaken by its NIMT younger sibling, the Makatote Viaduct, for several decades the Makohine Viaduct was the second highest railway bridge in New Zealand. The structure has not been significantly modified since construction, although it has been upgraded and strengthened in conjunction with changes to NIMT operational requirements, such as circa 1932 when heavier locomotives were introduced, and around 1984 in preparation for the railway’s electrification.

In March 2011 an IPENZ plaque was unveiled at the Makohine Viaduct, recognising its important place in the engineering heritage of New Zealand.

The Makohine Viaduct was added to the IPENZ Engineering Heritage Register on 24 April 2012.

This place has been recognised by Heritage New Zealand as a Category 1 historic place (List no. 32) and it is also part of the North Island Main Trunk (NIMT) Historic Area (List no.7793):

Beside State Highway 1 (SH1) about 11 kilometres south of Mangaweka, Wanganui/Manawatu.

The viaduct is clearly visible from State Highway 1 and there is a reserve where traffic can safely stop. This bridge is part of a functioning railway and therefore direct access to the structure is prohibited.