The Hikitia is a self-propelled steam powered floating crane which was constructed in 1926. That same year it travelled the oceans from Scotland to Wellington, where it has been based ever since. Once at its destination, the Hikitia entered the service of the Wellington Harbour Board, adding a further dimension to their existing stock of wharf based cranes. 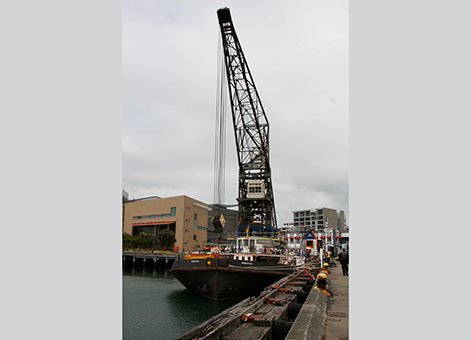 The Hikitia was owned by the Wellington Harbour Board for over 60 years, during which time it was involved in cargo handling, wharf and harbour facility construction and maintenance, and other heavy lifting activities. However, in the late 1980s the ship was sold, eventually being purchased by a dedicated group of enthusiasts whose aim was to conserve the Hikitia and maintain its operable state. This policy has been continued by the current owners, the Maritime Heritage Trust of Wellington, and recently involved the Hikitia going to the Lyttelton dry dock for remedial work in 2009. 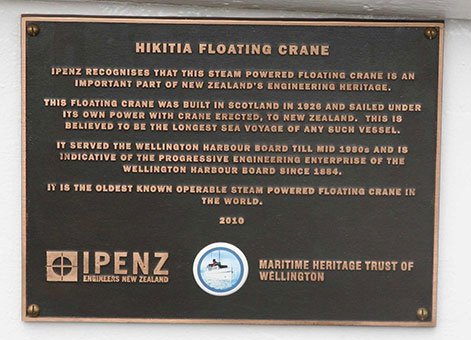 The Hikitia is usually berthed at the Taranaki Street Wharf in Wellington. It is basically a floating platform, originally constructed by Fleming and Ferguson of Paisley, Scotland. At this time it had a crane from Sir William Arrol and Co. of Glasgow mounted on it. The ship has not undergone significant changes in the meantime, aside from several boiler replacements.

Because it is thought to be the oldest remaining self-propelled operable floating crane in the world, the Hikitia is of outstanding engineering significance. This vessel is also special for many notable feats. Besides its record-setting journey to New Zealand, the Hikitia’s long service in Wellington Harbour has contributed greatly to the region’s economy. The Hikitia is also a well-known and recognisable vessel which has been associated with many events, but none as sombre as the recovery of the Wahine.

​Further information can also be found at the Hikitia website.

The Hikitia was added to the IPENZ Engineering Heritage Register on 9 September 2009 and a plaque unveiled on 7 December 2010.

The Hikitia is private property and access is not permitted. However, it is opened to the public from time to time and access is sometimes granted by its owners on special request. Despite this, the ship can usually be viewed at close quarters from the wharf.