Constructed between June 1898 and February 1899, Southland’s Clifden Suspension Bridge was the first bridge built over the Waiau River. 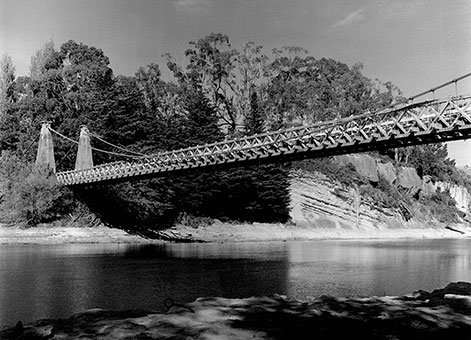 The European settlement of west Southland, known as Wallace County, increased substantially in the late 19th century, helped by a Government land sales programme. At this time (before the subsequent hydro power developments on the river began) the Waiau River was among New Zealand’s most forceful rivers and therefore bridging it was imperative to the success of settlements like Clifden and new surrounding farms. Indeed, a portion of each of the land sale proceeds were specifically earmarked for this, but it took several years and some strong campaigning by local Member of Parliament Michael Gilfedder (1865–1948) for the bridge to be realised. 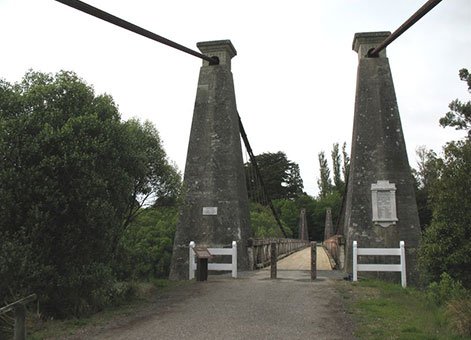 The Public Works Department (PWD) delegated the design of the structure to the Southland County Council’s esteemed engineer, Charles Henry Howorth (1851–1945), with the contract supervised on their behalf by PWD Dunedin District Engineer, Edgeworth Richard Ussher (1839–1916). Howorth’s suspension bridge has a 111.5 metre (m) main span and consists of steel suspension cables and hanger rods, and a heart totara and Australian hardwood deck. The large concrete towers were plastered to create the illusion of masonry construction. The structure was built by respected Invercargill contractor William Baird. 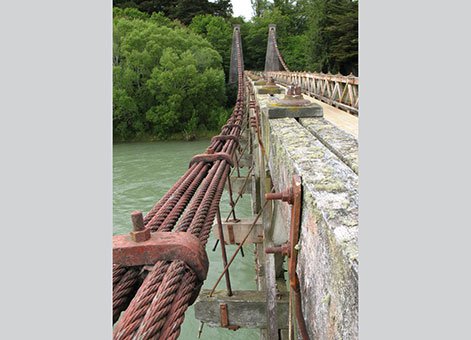 The single lane bridge was closed to road traffic in 1978, being replaced on State Highway 99 by a new bridge. Soon after, the Clifden Suspension Bridge became a New Zealand Historic Places Trust property, used as a footbridge, and it remains a valued local landmark.

This structure is important because it marks the fruition of a representative Otago and Southland bridge type, and is distinguished by its high level of materials and design integrity. The Clifden Suspension Bridge has engineering significance because it had the longest main span in New Zealand at the time it was completed, and it continues to rank among the longest nationally. This structure is also a lasting tribute to the experience of, and regard for, Howorth as an engineer. 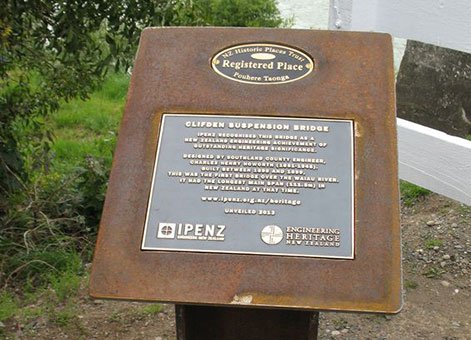 In 2010 the structure was closed to pedestrian traffic until conservation work could be completed. The bridge was re-opened in November 2013.

The Clifden Suspension Bridge was added to the IPENZ Engineering Heritage Register on 16 October 2012. A plaque was unveiled November 2013.

This place has been recognised by Heritage New Zealand as a Category 1 historic place (List no.4921):

The bridge is located in a historic reserve and spans the Waiau River between Bates and Gardner Roads. These roads are accessed from Clifden Highway, State Highway 99, north of Clifden township, Southland. The Clifden Suspension Bridge is west of the current highway bridge.

This structure is open to the public and can also be viewed from the riverbank.