By the mid-1920s it was clear that the power stations at Lake Coleridge and Waipori were not going to keep up with electricity demand. After a period of investigations, a site in the Waitaki River upstream of the town of Kurow was chosen and work started on the construction of the dam and power house in mid-1928.

This was the first major dam to be built in the South Island, and the design was undertaken by the Public Works Department under the direction of the Design Engineer, Hydraulic Structures, George Anderson. Anderson played a large part in the early hydro-electric development in New Zealand.

The site had reasonable foundations but was in a broad valley so the dam had a long length of 522 metres (m) and relatively low height, being a nominal 33 m. The gravity arch dam was constructed without a diversion channel, which posed some problems particularly in the construction of the final (closing) section of the dam. Progress was delayed a number of times when large floods occurred. 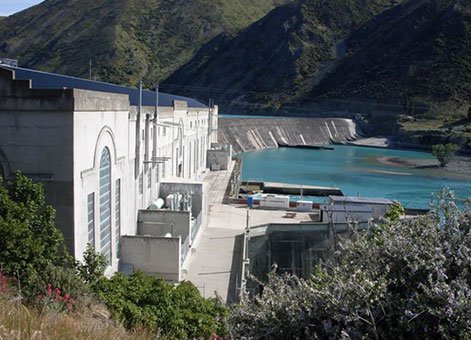 As construction proceeded in 1930, a dam design expert from Sweden, Professor Hörnell, visited the site and recommended the installation of a cut off wall and a drainage gallery at the toe of the upstream face of the dam to reduce the possibility of uplift forces on the base of the dam. Some years later, as a further measure to improve the dam stability anchoring cables were drilled from the dam crest down into the foundation rock in the early 1960s.

The site chosen also suffered a difficult climate with strong winds blowing down the valley and bitter cold in the winter making for some very difficult working conditions. Added to this, the construction proceeded through the worst of the Depression years, and this resulted in the demand by the politicians to minimise machine use and maximise man power. 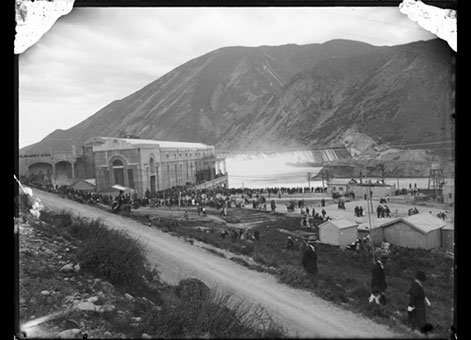 The power house is situated on the right (Otago) bank of the river and was originally designed to have five 15 megawatt (MW) generators (operating on a head of 21 m), although when the station was first opened in October 1934 only two were installed. The remaining three were installed progressively in 1940, 1941 and 1949. With continued growth in demand two further 15 MW units were added in 1954 in an expanded powerhouse to bring the station installed capacity up to its present 105 MW.

Finally, and perhaps as important as the engineering achievements, the project can claim to have been the model from which the Labour government’s national system of free health and hospital services was developed. Certainly, the health system developed on the construction site was largely due to the efforts of the local doc, Dr Gervan McMillan and the local Presbyterian minister, Revd Arnold Nordmeyer, both of whom were to become members of the first Labour government in 1935. 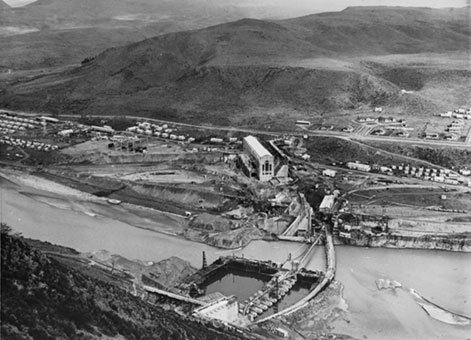 Public access is restricted. However, there is a good view from the lookout next to State Highway 83.