Wairoa Dam, completed in 1975, is one of a series of rolled earth water supply dams in Auckland's Hunua Ranges. Rolled earth dam design in New Zealand was significantly advanced by these dams constructed between 1950 and 1977.

The context for this system's construction is detailed in the Hunua Ranges Water Supply Rolled Earth Dams entry.

The Wairoa Dam in the Otau Valley was one of the earlier Hunua Ranges bulk water supply system projects to be identified and planned. It was included in rough surveys of the area as early as 1916, and Auckland's former Chief Engineer Water, Arthur Mead, carried out further investigations in 1930. Land purchases were undertaken between 1941 and 1955, at the same time as those for Cossey’s Creek and the Upper Mangatawhiri scheme.

Following a positive review of the site by CW Firth, now acting as a consultant after retirement from the Auckland Regional Authority (ARA), work commenced on the Wairoa Diversion Tunnel only four months after the work had been approved by the ARA Works Committee.

Investigative drilling for the dam was carried out along one of several centrelines surveyed earlier in 1955–56. Investigation of potential borrow areas nearby revealed an abundance of “weathered argillite” for the dam shoulders and “weathered argillite of clay/silt classification”, at or close to optimum moisture content, for the clay core. As with the Mangatangi Dam, sophisticated slip circle analysis enabled the design of the dam to incorporate steeper 2.5:1 slopes with stepped berms, thereby saving fill material. 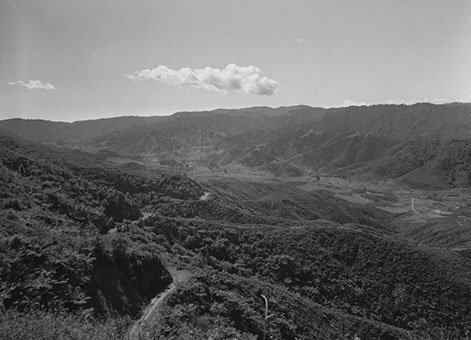 A vertical chimney drain and other foundation drainage innovations were undertaken, based on experience with the Lower Huia Dam in the Waitakere Ranges, which was being constructed at about the same time. The valve tower, 70.1 metres high, was constructed in six days using slip-forming methods by the contractor. Upon completion, along with the delivery pipe chamber, diversion of the stream took place. A new approach to mix design involved including aluminium powder in the concrete, thereby eliminating virtually all leakage into the tower and consequent corrosion problems experienced with previous dry well towers.

The embankment was built over two construction seasons, and was exemplified by particularly smooth operational management of the job, assisted by the close proximity of the borrow areas, good working relationships between the contractor and the ARA, and the use of modern and well maintained earthmoving and compaction machinery. Improved compaction machinery included a self-propelled compactor with its own spreading blade.

The construction completion of the bellmouth spillway and stilling basin in late 1974, and all other ancillary works by May 1975, enabled the closure of the scour valve and filling of the reservoir to take place seven months ahead of schedule, with the official opening ceremony taking place in the pouring rain on 23 May 1975.

The dam and reservoir can be seen from the Wairoa Loop Track. Access information is available on the Auckland Council website.