The Wairākei to Taupō section of State Highway 1, opened in 1972, was one of the first parts of that road specially designed and constructed to maintain sympathy with the natural environment.

Then, in 1970 the Prime Minister, Sir Keith Holyoake, told an environmental conference that it was a sign of New Zealand’s progress that we no longer regarded a road simply as a road, but realised that it must be functionally efficient, as well as pleasing to the eye and in tune with its environment. Several recommendations from the environmental conference were made to the then National Roads Board on the landscaping and beautification of all public roads.

The same year (1970) a revision of Thom’s original paper published in New Zealand Engineering set down an environmental code for the implementation of the conference recommendations. It also placed on record some relevant aspects of road design and planning, incorporating recommendations from a British “Countryside” conference, and a United States White House conference on national beauty.

Because the impact of roading on the environment is immense, the roading engineer is a key figure whose positive contribution can add greatly to the potential of New Zealand’s scenic attractions. This section of State Highway 1 is a prime example of this policy. 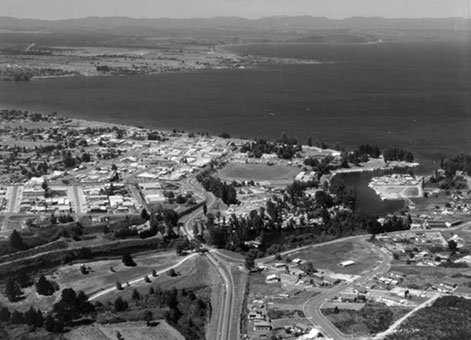 Design: Ministry of Works and Development.

This item of New Zealand’s engineering heritage was recognised as part of the IPENZ “Engineering to 1990” project which the Institution organised to help celebrate the country’s sesquicentenary in 1990. A plaque was unveiled to mark the significance of this road as part of the development of the nation.

This section of State Highway 1 is open for use at all times.