The connection of Cambridge to Leamington and Te Awamutu was an important link in the early roading system. The first bridge completed in 1871 was destroyed by a flood in 1875 and its replacement, a wooden truss girder bridge called the “Red Bridge” was showing signs of advanced deterioration when the Mayor, WF Buckland decided in 1899 a new high level bridge over the Waikato River was needed.

The steel arch bridge was designed by the eminent American engineer John Alexander Low Waddell of Kansas City. The bridge stands 38.4 metres (m) above ordinary river level with a three pinned and braced arch of 88.4 m with side girder spans of 19.8 m and 12.8 m. The final cost was £13,000 in 1907. 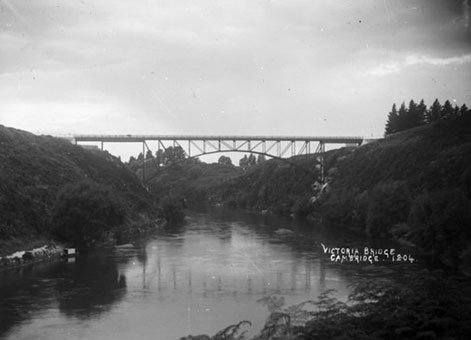 The bridge was prefabricated in the United States of America by the American Bridge Company of New York and shipped to New Zealand as a 330-tonne kitset. It was then railed to Cambridge and Te Awamutu for erection by Dunedin Contractor G. M. Fraser. Supervision was the responsibility of James Edward Fulton, a talented New Zealand engineer who designed many fine bridges and was for a time Manager and Locomotive Superintendent of the Manawatu Railway.

This bridge was the first example in New Zealand of construction using the process of cantilevering the two half arches from each bank. When the two halves were connected, 305 tonnes of steelwork had been erected. For its time it was considered very advanced bridge design and construction practice.

The builder, GM Fraser, had great difficulty in meeting the completion date of December 21 1907, when a grand opening by the Governor, Lord Plunket was planned. The problem was a breakdown of the crushing equipment making aggregate for concrete at Te Kuiti. When the Council refused to grant an extension of time, the contractor had to work day and night to complete the bridge for the official opening. The official opening, included Lord Plunket, five Members of Parliament, 13 mayors, four county chairmen and, according to photos, most of the district’s citizens.

The original bridge had 150-millimetre softwood timber decking which was replaced in 1925 with heavier hardwood. In 1963 the hardwood deck was replaced with a reinforced concrete deck and in 1978 repairs were carried out and an asphalt surface laid over the concrete. 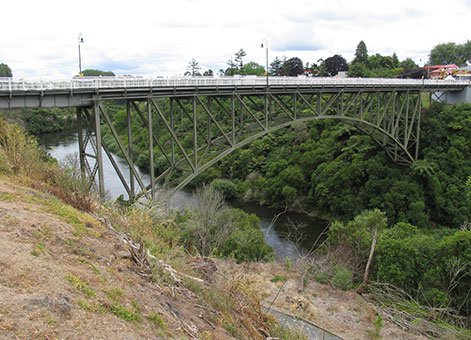 This place has been recognised by Heritage New Zealand as a Category 1 historic place (List no.4159):

At the centenary celebrations on 15 December 2007 IPENZ unveiled a plaque commemorating the event:

"IPENZ recognises this engineering work as an important part of New Zealand’s engineering heritage. This high level bridge across the Waikato River demonstrates the degree of cooperation between New Zealand and United States engineers when in 1907 they built this enduring and practical access bridge of three-hinged arch design, constructed by cantilevering from both abutments, has served Cambridge and surrounding areas for the past 100 years." 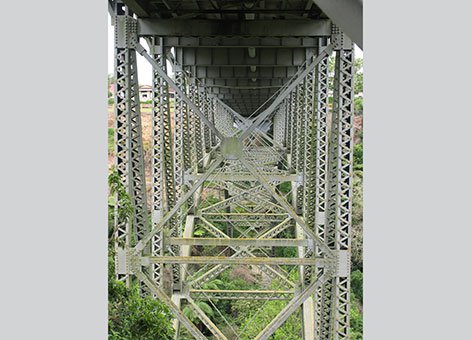 From Cambridge township follow Victoria Road towards Leamington to the Victoria Bridge which crosses the Waikato River close to both townships.