Upper Mangatāwhiri Dam, completed in 1965, was one of a series of rolled earth water supply dams completed in Auckland's Hunua Ranges. Rolled earth dam design in New Zealand was significantly advanced by the Hunua Ranges dams, constructed between 1950 and 1977.

The context for this system's construction is detailed in our Hunua Ranges Water Supply Rolled Earth Dams entry.

The dam site is in the centre of the Moumoukai Valley. This is an intermontane valley formed by the back-ponding of the Mangatāwhiri Stream from fault-tilting of the Hunua Block. A lake formed about one million years ago was then infilled with gravels and silt Subsequent overflow and down-cutting of the outlet resulted and the lake was drained, leaving behind some of the old infill materials. The stream was cut down to the greywacke – argillite bedrock, containing manganese oxides, some in mineable quantities. In general, ideal materials were found for the provision and selection of clay and clay-rubbles for the core of the dam, and in localised areas, fine-grained greywacke and argillite suitable for facing stone.

Spurs of country rock on the eastern and western sides of the valley proved to be suitable for a spillway on the east, and valve tower, intakes and horseshoe shaped diversion culvert on the west. The spurs also provided for abutments at each end of the dam. 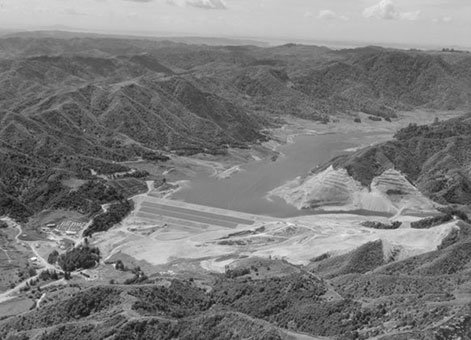 The dam itself was typical of the rolled earth type, and almost identical to the Cosseys Dam (the first in the series of dams) in height and general cross-section, but is roughly three times the length and volume of fill material. Construction and test methodologies were similar. Haul distances ranged from 400 to 1,000 metres (m). The reservoir impounded only 15 per cent more water in storage than Cosseys Dam, but had a 45 per cent greater yield.

Total earthworks were placed in 276 days, about the same time as the Cosseys Dam. The increased fill rate arose from improved earth-working equipment and favourable weather. The average compaction rate was 4,760 cubic metres (cu.m.) per day, reaching a maximum of 8,730 cu.m for one day.

The spillway is a curved side weir, 117 m long and discharging 24,000 cusecs (706 cumecs) into a trapezoidal weir channel and then into a 185 m long rectangular discharge channel. The concrete valve tower is 38 m high, and 5 m in diameter and was constructed by conventional slip-forming.

This project was the first to actively include students from the Ardmore Engineering School in its construction, initially as labourers on the measuring weirs and other ancillary works, and then as technicians in the soils laboratory undertaking compaction testing of the embankment.

With the completion of this dam, 50 per cent of the potential storage of the Hunua catchments was realised. It also marked the end of the first stage of development in the ranges, and the end of an era in which the Auckland City Council acted as the bulk water supply authority to the citizens of Auckland. From 1 April 1965 this responsibility was handed over to the Auckland Regional Authority (ARA). However, engineer CW Firth continued his close involvement with the remainder of the Hunua developments, having been appointed the first Director of Works for the ARA.

The dam and reservoir can be seen by parking at the end of ARA Drive and walking a short distance on the marked track.