The Otago Iron Rolling Mills Company commenced operations under the name of Smellie Brothers Limited. Their first mill was official opened by Julius Vogel (1835–1899) and Robert Stout (1844–1930) on 20 August 1887. 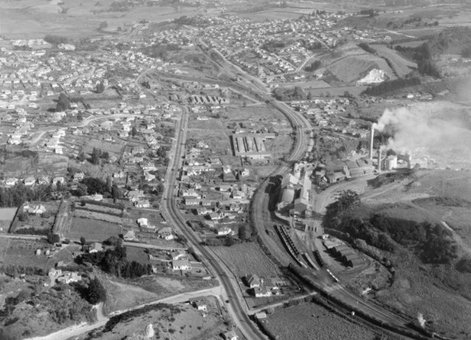 The move to New Zealand followed an 1885 visit by John to investigate the possibilities of establishing an iron industry here. The idea was to manufacture iron from recycled scrap, and use a Bessemer Converter to manufacture steel. He returned to England with a favourable report, and Dunedin was chosen as the site for their family enterprise because at that time it was the chief commercial town and engineering centre in New Zealand.

The following year, 1886, several branches of the Smellie family, together with a number of skilled workers, immigrated to New Zealand and settled at Green Island, near Dunedin. Plant and equipment arrived shortly afterwards. It was promptly erected and production started. The prime purpose was to roll scrap iron into bars. However, the company also manufactured the first castings in New Zealand, using the Bessemer process. The castings were for the pillars for the old Cumberland Street overbridge.

Like most pioneering concerns Smellie Brothers experienced many setbacks and difficulties early in its history and was eventually unable to carry on. However, the Smellies subsequently obtained financial backers and a new company was formed in 1890, named The Otago Iron Rolling Mills Company Limited. This company’s first directors were William Orr Smellie Senior, John Smellie and the Hon Alfred Lee Smith.

In 1914 the company formed a subsidiary, known as The Iron and Steel Company of New Zealand Limited, to sell the rolling mills’ products and to import what the rolling mills could not produce. This proved to be a very successful venture.

The Otago Iron Rolling Mills continued rolling iron from scrap, and making steel in its Bessemer converter throughout World War One, but later imported steel billets for rolling in its mills. The company owned and operated three ships to keep the rolling mills supplied with raw materials during World War One and for a short time thereafter.

Indeed, the company provided a vital service to New Zealand during the two World Wars, because it kept the wheels of industry turning here when it was virtually impossible to import finished iron and steel. A large new building was erected during World War Two to house duplicate rolling mills, which increased the supply of iron and steel. A local Ministry of Works architect designed the buildings.

This building was approximately 5,000 square metres, with substantial hardwood columns bolted by cleats to a concrete floor, and hardwood beams supporting parts of the plant and machinery. The roof trusses were formed with welded angle iron, quite possibly manufactured on-site from angle iron produced by the mills. There were two different forms of truss design, one with both vertical and diagonal struts, and the other comprised of inclined struts.

The interior structure of this building has been described as having high architectural and aesthetic significance. The openness and views through the building, including up to the ridges, are of high value.

The rolling mills operated until 1953 when various difficulties forced its closure. In anticipation of this, the Otago Iron Rolling Mills Company purchased a controlling interest in Farra Brothers in 1948. Later two other companies, Newberry Walker and A. L. and C. Currie were also purchased, and operated under the Farra Brothers name. After the merger with the Dunedin Engineering and Steel Company Limited in 1969, the firm became known as Farra Dunedin Engineering, and then in 2005 became Farra Engineering.

The future of the Otago Iron Rolling Mills buildings

In 2011 a resource consent application was lodged with Dunedin City Council to establish a 4,900- square-metre retail development in the former Otago Iron Rolling Mills main building. To do this the mill building would be gutted, but the columns and trusses retained. In 2012 the resource consent was granted enabling retail activity to take place in the building.

The site and buildings are not open for public viewing.