This single span deck arch bridge was built over the Ohau River in the South Island’s Mackenzie Country in 1889. The Ohau River Bridge has a clear span of 36.5 metres (m) and an overall length of 41.5m. 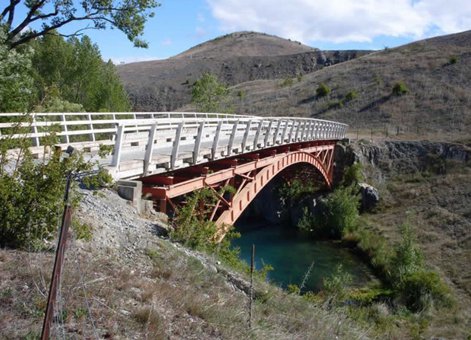 It was probably designed by Charles Banks, who was the Waitaki County Engineer at this time. All the metalwork was fabricated by R and S Sparrow in Dunedin under the direction of Edward Roberts, Works Manager. Roberts later worked as a private consultant engineer in Dunedin and was renowned for his gold dredge designs.

The bridge is still standing today, but the construction of the hydroelectric scheme has modified the river considerably and the bridge has been bypassed by a new highway over the Ruataniwha dam. The bridge served the construction project well. When the construction houses were transported from Otematata to Twizel, the handrails of the bridge were hinged down to allow their passage. The heritage value of the bridge was recognised by the designers and builders of the dam and the downstream toe of the dam was located to preserve the bridge and allow water to keep flowing under it.

There is an access road off State Highway 8 just north of the Ruataniwha Dam in the Mackenzie Country.