An integral part of the Wairakei Power Scheme, Ōhaaki is notable for its 105 metre (m) high cooling tower and the re-injection of water into the steam field. 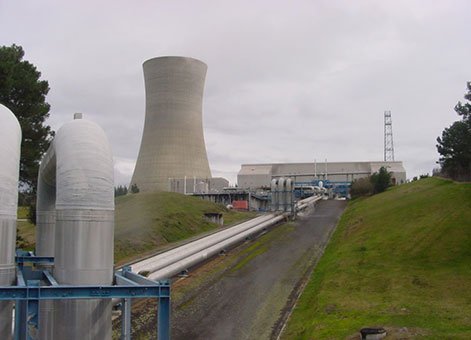 Developed in harmony with Māori tribal values, the Ōhaaki power station is an integral part of the Wairakei system. Ōhaaki uses tower cooling instead of river water and conserves the borefield by condensate reinjection. Located on the Broadlands geothermal field, about 25 kilometres (km) north of Wairakei, and opened in 1989, Ōhaaki added 108 megawatts (MW) generating capacity to the national grid and contributes annually about 750 gigawatt hours to the country’s energy resources – approximately three per cent of total requirements.

The geothermal fluid is fed to five separation plants where the steam and water are separated. To avoid any contamination of the Waikato River, this hot separated geothermal water is reinjected back into the ground at 150 degrees Celsius. This also prevents silica build-up in the pipelines and plant. The steam is piped to the power station and passes through the turbines to generate electricity. The steam then passes to the condenser where circulating water is sprayed through the steam to cool it. 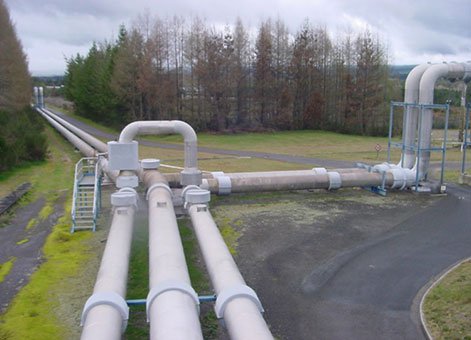 The resultant warm water is then passed through a natural draught cooling tower, a concrete structure which is a first for New Zealand. Incorporating state-of-the-art design, its thin shell and special foundations are designed to resist wind and earthquakes. It is 70 m diameter at the base, and 40 m at the throat. The tower will remove 420 MW of heat from the 20,000 tonnes per hour of circulating water as it falls through an induced flow of air. The evaporation of a small fraction of water provides the necessary cooling of the circulating water. In this way the circulating water system continuously gains condensed steam, which is balanced by evaporating losses from the cooling tower and by discharge of condensate which is reinjected into the ground.

Reinjection has not been carried out previously in New Zealand on such a large commercial scale. The non-condensable gases, mainly carbon dioxide, are extracted from the condenser by gas exhausters and are dispersed from the cooling tower. A system continuously monitors the concentration of hydrogen sulphide in the area surrounding the plant to ensure that there is no build-up of gas.

Some of the hot water separated from the geothermal fluid is used in nearby wood-drying kilns.

Turn off State Highway 5 on to Ōhaaki Road and then on to the station access road.  There is a good view of the geothermal field and the powerhouse at the station lookout.

39 kilometres north of Taupo, on the eastern side of State Highway 5, Waikato.