Auckland's North Head had the longest history of any of New Zealand’s coastal forts. It was in service until 1957 when the coast defence network was closed. 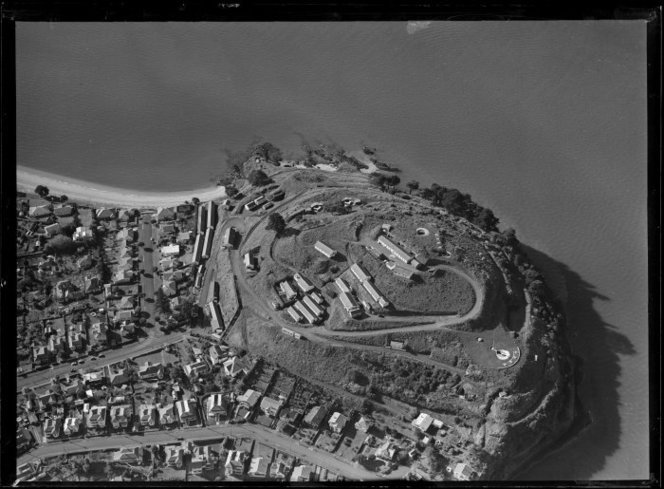 It is not surprising that North Head, with its commanding position on the Waitematā harbour, has been a strategic defence site for over a century. The “Russian Scares” of the late 19th Century led to coastal defences being urgently built at 14 sites around New Zealand in 1885, including five in Auckland. These were located at North Head, Bastion Point, Point Resolution (Parnell), Fort Takapuna and Mount Victoria.

Under the control of the Public Works Department in 1885, 300 unemployed men were sent to work on North Head. But the construction proved to be too expensive and any military threat had diminished. To reduce cost, 30 to 40 prisoners were used for the work and the whole installation re-designed by Captain Edmund Tudor Boddam.

Prisoners were housed in a building that still exists on the top of North Head. Using picks, shovels and wheelbarrows, tunnels were dug, underground spaces formed, and concrete was mixed and laid by the prisoners. Three guns, the most up-to-date available at the time, were installed in hidden pits. The North Battery defended Rangitoto Channel, another to the south defended the inner harbour and the third larger gun was on top of the summit. These guns with barrels weighing more than 13 tons were designed to retract underground for loading. One of the guns has been restored for ceremonial firing at the North Battery.

In 1905 two new 6 inch Mark VII guns were installed to cover the Rangitoto Channel. During the First World War, these guns provided the main defence with the older disappearing guns in support along with search lights and generators.

In the 1930s North Head’s defences were upgraded with new generators installed and a network of new searchlight emplacements built.

During the Second World War North Head became the headquarters of the 9th Heavy Regiment of the New Zealand Artillery. The Women’s Auxiliary Army Corps and the Navy also used North Head. At the start of the war there was insufficient accommodation and searchlight crews often had to bunk down in tunnels. In 1940 a major building programme started and by the end of the war there were more than 30 barracks and administration buildings on North Head. The Fire Commander’s Post on the summit of North Head controlled all of Auckland coastal defences.

North Head is a public reserve close to Devonport managed by the Department of Conservation. It can be reached by ferry from central Auckland to Devonport and a pleasant 2 kilometre walk along King Edward Drive to Cheltenham and Takarunga Roads

Peter D Corbertt, A First Class Defended Port: The History of the Coast Defences of Auckland, its Harbour and Approaches, 2003.