Built for the New Zealand Express Company Limited in Dunedin and opened in 1908, this is an early multi-storey building that incorporates precast concrete, and a reinforced concrete raft foundation and structural frame. 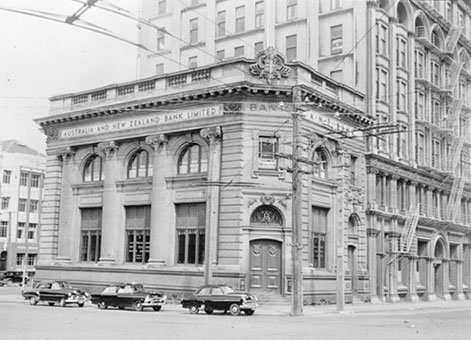 The Evening Star on 21 September 1908 said “this class of construction has so far not yet been generally adopted in the colonies” and “the full plans and specifications were submitted to two competent engineers for report as it is admitted the whole system is an engineering one”.

The building had many features which were very advanced for its time and predated by many years their general adoption elsewhere in New Zealand. These features include:

The building also featured a reinforced concrete raft foundation, which was probably a first for New Zealand. This type of foundation was used because the ground had very recently been reclaimed from the harbour.

The many innovations in its design and construction are, undoubtedly, the reason for the building’s long life, as they give considerable flexibility to the internal spaces. This has allowed for the diverse needs of the various firms and companies who have occupied it over the last century.

This building is sometimes referred to as the New Zealand Mutual Funds Building or Consultancy House.

This item of New Zealand’s engineering heritage was recognised as part of the IPENZ “Engineering to 1990” project which the Institution organised to help celebrate the country’s sesquicentenary in 1990. A plaque was unveiled to mark the significance of this building as part of the development of the nation.

This is not a public building, but it can be viewed from the street.