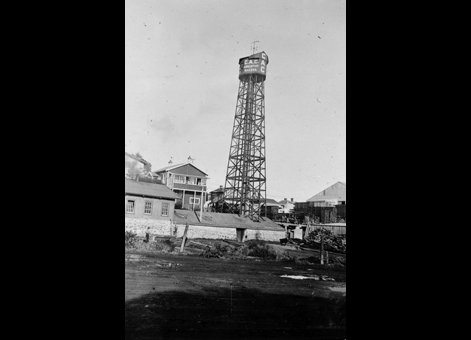 CAC was formed in 1885, by Major John Whitney and W H Hazard. This was at the time of the “Russian Scare” when Tsar Alexander brought some of his naval fleet into the North Pacific to Vladivostok leading to fears that he was about to expand his empire. Fortifications were quickly built and the need for ammunition independent of the supplies from Britain became urgent. CAC was the first munitions factory in Australasia and later established a factory in Melbourne.

CAC prospered and apart from the needs of the military, they provided bullets for hunters and shot gun cartridges for duck shooters.

The shot tower was built in 1914 to produce the small spherical lead pellets for the shot gun enthusiasts. The pellets fired from the gun formed a pattern when aimed at a bird. They were earlier produced in Nelson, by a Mr Lylie, using a casting process that was laborious and slow in production.

The first operator of the new Auckland shot tower was the same Mr Lylie assisted by his two daughters. Lead blocks were raised to the top of the tower by a lift, melted in a furnace and poured into a pan with many small holes in the bottom so small drops fell down the 30-metre height of the tower as perfect spheres which solidified in the air and splashed into soapy water at the base. They were polished and sized with rejects being returned to the molten metal. Production of up to 1,000 tons per year was possible.

The Mount Eden Shot Tower is quite unique as a light steel structure built by an Auckland blacksmith W Wilson and Company. Other shot towers, all built in the 19th Century, include two in the United Kingdon, four in the United States of America, three in Australia and are built in the form of brick chimneys.

CAC was an essential industry through both World Wars and each time expanded its manufacturing significantly. At the end of World War Two it was producing up to 25-pound shells.

Imperial Chemical Industries (ICI) of the United Kingdom, who had been major manufacturers of explosives with the NOBEL trade mark and following Nobel’s patents for Gelignite, supplied explosives to the New Zealand mining, quarrying and tunnelling activities and bought control of CAC in about 1960. The General Manager of ICI explosives in New Zealand was Dick Hazard, no doubt related to the CAC founder WH Hazard.

A little known unique activity of CAC was the commercial harvesting and canning of Toheroa, the large shellfish found on the West Coast beaches North of Auckland. This was carried on for many years until about 1975 when the fishery was closed.

The site is privately owned but the structure is easily seen from the roadside.