Gold winning by bucket dredge is a New Zealand development that began in Otago. 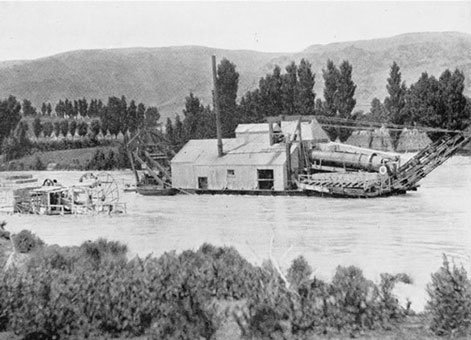 By means of dredges, wash-dirt was obtained from the beds of large rivers. The earliest “spoon-dredges” were employed in 1863 and for a time they won a considerable amount of gold with very simple appliances. Five years later the bucket type of dredge was introduced, and this, in various forms, has been used ever since. Important changes however, have been the introduction of steam dredges about 1882, and electric dredges in 1890, and the accidental but very profitable discovery at the very end of the century, that often there were rich gold-bearing deposits concealed beneath a hard layer which was apparently the bottom of the river bed.

The first successful gold dredge was commissioned through the vision and perseverance of Sew Hoy of Sew Hoy Big Beach Mining Company and was built by Kincaid and McQueen, Dunedin.

Both the first electric dredge and the first to be electrically-operated from a three-phase alternating current supply were built and operated in New Zealand.

The former of these, “The Sandhills Dredge”, was designed and put into operation in 1889–90 by RC Jones who later became one of the founders of the firm Turnbull and Jones. This dredge operated on the Upper Shotover River, Central Otago, power being supplied at 1,300 volts to operate the plant on what proved to be the first electrically operated gold dredge in the world. The dredge was a complete success, the electrical equipment performing its work faithfully. 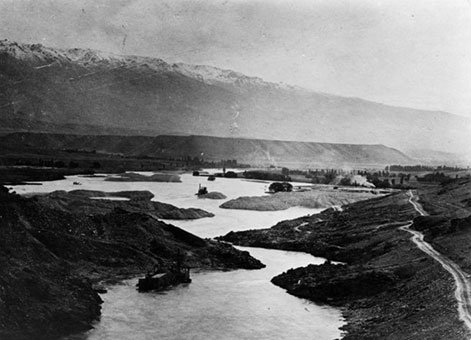 This success was followed several years later by another pioneer – “The Fourteen Mile Beach Dredge” – which was the first electrically-operated dredge in the world driven by a three-phase alternating current supply.

By 1900 there were 187 dredges at work among the gravels of the Clutha. It is considered to have been the greatest assembly of gold dredges the world has ever seen. In the boom period of dredging, about that time, efficient dredges secured as much as 1,000 ounces of gold in one week’s working.

The Kanieri, the last of the 150 gold dredges that worked the West Coast, was still operating on the Taramakau River in 1990. Gravel scooped up by a chain of buckets was washed over sluice boxes and gold tables and the waste or tailings deposited at the rear of the dredge, something that environmentalists would not tolerate today.

Patearoa, 17 kilometres south of Ranfurly, had its goldrush in the early 1860s. One of the few relics from those days is a dredge operated from a barge on the nearby Taieri River in 1896. It was abandoned and became partly submerged in the river, but was salvaged and restored in 1978 for display in the town.

The dredge buckets in Cromwell Town Centre, Cromwell represented the development of bucket dredging from the “Shine No 1” in 1900, to one of the world’s largest, the “Austral Malay” in 1940.

This item of New Zealand’s engineering heritage was recognised as part of the IPENZ “Engineering to 1990” project, which the Institution organised to help celebrate the country’s sesquicentenary in 1990. A plaque was unveiled to mark the significance of the gold dredges developed in this country as part of the development of the nation.

“The history of the design and construction of gold dredges in New Zealand” (PDF 530KB) unpublished manuscript, circa 2009.

Gold dredging in the Clutha River [circa 1905]

Dredging a river for gold near Lowburn [circa 1900]