The Driving Creek Railway at Coromandel is the result of 32 years of innovative development by potter, Barry Brickell. The 381 millimetre (mm) gauge railway climbs 112 metres (m) up a steep hillside in 2.7 kilometres (km) to a spectacular vantage point called the Eyeful Tower. 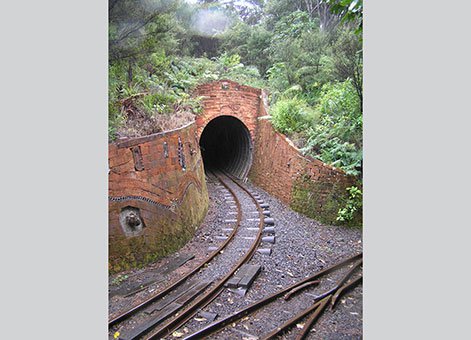 Although the Driving Creek Railway was originally designed to bring clay to the pottery works, it is now a tourist attraction bringing many benefits to Coromandel. The railway has many interesting engineering features including a double-deck viaduct, as well as many other high curved viaducts, spirals, tunnels and reversing sections to gain height. The passenger cars are unique – articulated with self-steering bogies, hydraulic driving and braking on all wheels. They can safely climb and descend grades of up to 1 in 14 with full loads of passengers.

Barry, who acknowledges his long-time love of railways, has had professional engineering assistance to check his designs, but the innovation, Kiwi ingenuity, technical understanding of the problems, and resulting solutions which went into the achievement of Driving Creek Railway must be credited to Barry. 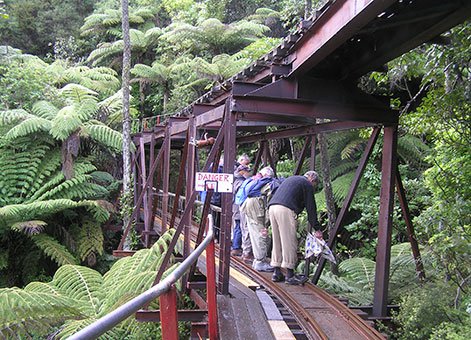 The name Driving Creek originates from the Kauri timber milling days when logs were transported, using the current, down the watercourse to the sea after being released from driving dams in the hills.
Over a century later another industry came to Driving Creek.

Barry completed a science degree specialising in geology and botany at the University of Auckland in 1960 and started as a secondary school teacher. But his passion was for making pottery and he moved to Coromandel in 1961 to become a full-time handcraft potter.

He had always had a love of railways and, in particular, was fascinated by the Ongarue bush tramway, with which he became familiar through a New Zealand Railway and Locomotive Society visit in 1956. Barry purchased a small block of land and built a 266mm gauge, 0.6km long railway to transport clay, firewood, coal and other materials to his pottery studio and kilns.

The rails, some rather corroded, came from the Nihotupu Tramline, in the Waitakere Ranges, which was being upgraded. Old wheels and axles were sourced from Silverstream brickworks in Wellington. This initial railway was constructed almost exclusively by Barry, and included a long curved viaduct, a spiral and a tunnel. By 1973 Barry wanted to expand into a communal pottery establishment, so he purchased another 24 hectare block of hilly scrub covered land nearby. 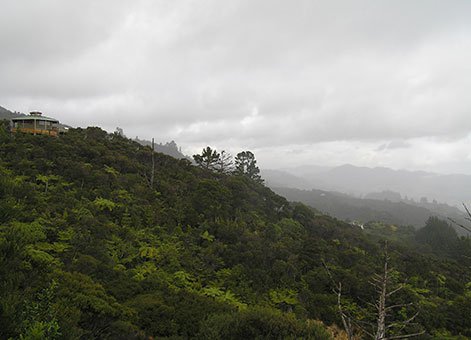 View towards the summit, Eyefull Tower, from Driving Creek Railway's Rima No.5 reversing point, May 2012. IPENZ.

The early stage of the Driving Creek Railway is shown near the beginning of this New Zealand Film Unit production from 1970.

Trouble viewing the film? See NZonScreen for what programmes are required (www.nzonscreen.com)

At this time several Waikato coal mines were closing and he was able to obtain used rails at scrap steel price. He commenced building a completely new line with a 381mm gauge. Construction of the first of eight viaducts, all spanning deep valleys, began in 1977. This horseshoe-shaped viaduct is 43.6m long with piers up to 5m high. The steel beams for the structures were sourced from scrap yards. Barry continued to survey the line on upwards with a home-made “gradimeter”, consisting of a Vickers gun sight mounted on a tripod with levelling and adjustment thumb screws.

It was 1979 before Barry’s first locomotive for the new railway, “Dieselmouse”, was built at the Driving Creek workshop. This had an 8-horsepower single cylinder diesel engine and a second hand two speed, reversing gearbox that had previously been used by Auckland Harbour Bridge contractors. Barry continued to self-fund the railway’s construction and maintenance. It was not until 1988 that he started advertising the railway as a tourist attraction. The donations from passengers were inadequate to pay for the costs, so Barry sought a licence to formally charge fares. He approached his civil engineer cousin, Derek Brickell, who was able to inspect and certify all the structures by testing them with 1.5 times the design loading and measuring deflections. Eventually, the Ministry of Transport was satisfied and the compliance letter arrived. On 20 October 1990 the railway was officially opened for fare-paying passengers, initially at $6 per adult for a return trip.

A major challenge for Barry was the design and construction of the double deck viaduct, and a spiral, which opened the line to Hoki Mai station in 1991. By June 1995 the rails had reached Horopito where there was a good view over Coromandel town and the Firth of Thames beyond. But Barry was not satisfied. In 1997 he began surveying for an extension to a high point where the present Eyefull Tower terminal is located. The railway extension and this significant structure with wide views was completed in 2003 and officially opened by Dame Catherine Tizard.

Visitor parking is available. The Driving Creek Railway website has details of the train operating times.

Barry Brickell, Rails Towards the Sky: The story of Driving Creek Railway, 2011.