An integral part of the national railway system, the Picton terminal handles 3 million tonnes of freight and 750,000 passengers annually and has been in operation since 1962. 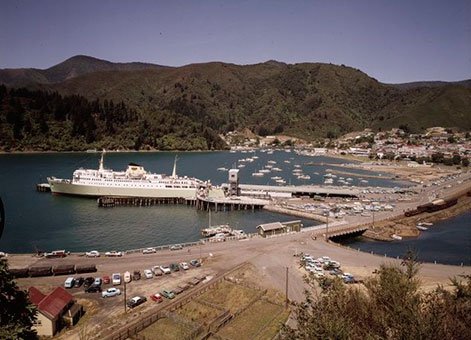 Construction of the terminal was difficult. There were severe site constraints. Existing service needed to be maintained without interruption during the construction of Number 2 berth and an overpass over highway and rail yards needed to be erected. The conversion of Number 1 berth included lengthening the longarm and replacing the linkspan and gangways and Number 2 berth was subsequently converted for larger vessels. Dominant factors were urgency, economy, the limitations of the port itself and the desirability of high standards of public amenity.

As of 1990, total reliability of operation over 37 years had been achieved.

This item of New Zealand’s engineering heritage was recognised as part of the IPENZ “Engineering to 1990” project which the Institution organised to help celebrate the country’s sesquicentenary in 1990. A plaque was unveiled to mark the significance of this ferry terminal as part of the development of the nation.