The Cobden Railway Bridge (Bridge 1 Rapahoe) was demolished in mid-2006. The structure crossed the Grey River and had been completed in 1898 as part of the railway north from Greymouth, in New Zealand’s South Island. A span remains in situ on the north bank and a relocated span with interpretation are located on the town side. 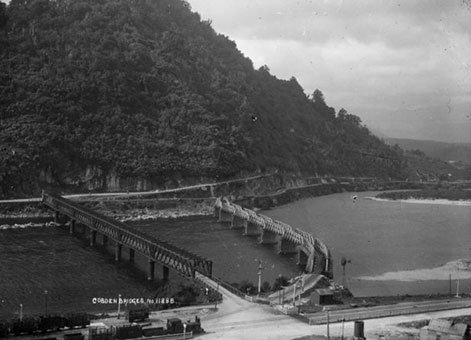 The history and economy of the West Coast has been shaped by gold mining, coal mining and timber milling. Coal was mined as early as 1864 from Brunnerton (Brunner), 13 kilometres north-east of Greymouth. There were numerous other coalfields, like Coal Creek in the Runanga area. The Coal Creek Railway was begun in the late 1890s, and when this company changed to the Point Elizabeth Coal Company the railway took that name. Construction of the railway was taken over by the Government in June 1902. It was not until December 1904 the line was handed over to the New Zealand Railways Department. 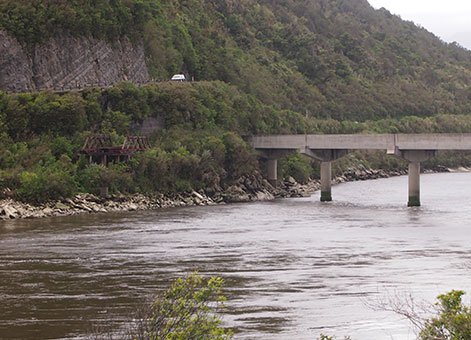 Northern remnant of the Cobden Railway Bridge and the replacement bridge, November 2014. IPENZ.

This railway crossed the serpentine timber Howe truss bridge for more than a century. In the early 2000s the condition of the Cobden Railway Bridge motivated the New Zealand Railways Corporation and Solid Energy to progress its replacement. Solid Energy were the sole user of the line, using the railway to transport coal from its Spring Creek Mine. The new concrete structure was built up-stream of the original bridge, and upon its completion the Cobden Railway Bridge was demolished. 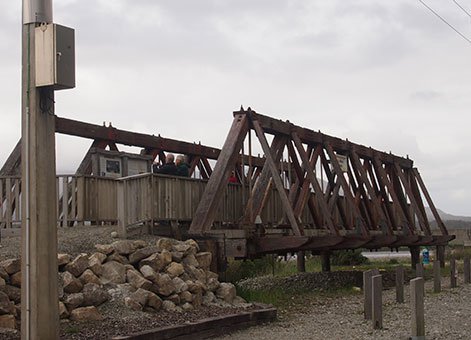 Relocation span from the Cobden Railway Bridge on the south bank of the Grey River, November 2014, IPENZ

Formerly crossing the Grey River, north Greymouth, West Coast. Small sections of the bridge remain in situ and one of the trusses was relocated to the riverbank.