The Chelsea Sugar Refinery commenced operation in 1884 and is notable because it is still New Zealand’s only sugar works. It’s one of the longest continuously functioning works in New Zealand and is one of Auckland’s most important industrial landmarks. 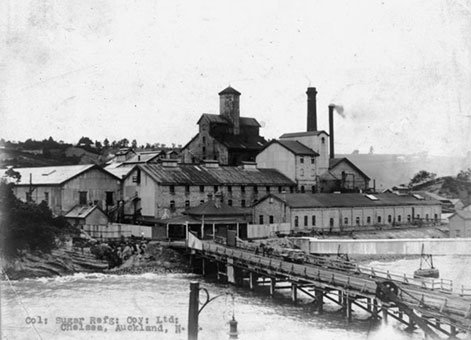 Edward Knox (1819–1901), Chairman of Colonial Sugar Refining Company (CSR) of Australia, visited Auckland in 1881 and purchased 76 hectares of land on which to build a sugar refinery that would provide product for the New Zealand market. The Government had offered an incentive to the first company to establish a sugar refinery in New Zealand. The proximity to sugar cane sources coming from Fiji made a site at Birkenhead attractive. In 1883 the New Zealand Sugar Company was formed as a joint venture between CSR and Melbourne’s Victorian Sugar Company. Two thirds of the company shares were held by the Australian companies, with the remainder in the hands of New Zealand shareholders which included prominent Auckland businessmen Sir Frederick Whitaker (1812–1891), Alan Kerr Taylor (1832–1890), Lawrence David Nathan and Joseph Liston Wilson (1837–1902).

The refinery site on the north side of the Waitemata Harbour was ideal because of its deep water close to the shore. Fresh water was an essential requirement for a refinery and there was ample supply available from the Duck Creek catchment area within the purchased land.

The initial refinery buildings were designed by Auckland consulting engineers Boylan and Lundon. The process design for the works, with a capacity of 10,000 tonnes per year, was provided by James Muir (c.1840–1922), CSR’s engineer. Muir had built sugar refineries in Scotland and England before joining CSR and designing Australian refineries at Pyrmont and Broadwater Mill. 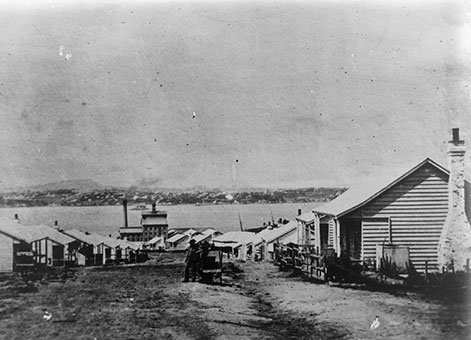 A level site of two hectares was needed for the Birkenhead buildings, tramways and workshops. Therefore, the site required the removal of a headland and excavation by pick and shovel of 130,000 cubic metres of clay. One and a half million bricks were produced from the excavated clay and were fired in an on-site kiln. These bricks were used to construct two dams and the buildings which are still in use. Timber for buildings was cut from native trees on the site.

At 37 metres high, the tallest building is the Char House where the raw sugar is purified. Four hundred tonnes of machinery and equipment was built in Greenock, Scotland and shipped to the Birkenhead site. The water supply was assured by constructing two dams across Duck Creek. Two additional dams were added later. Two large wharves were built; one to load and unload the processed and raw sugar, and the other for unloading coal. Holes for the wharf piles were blasted into the solid rock of the harbour bed. The coal wharf was dismantled when coal firing was replaced with natural gas. 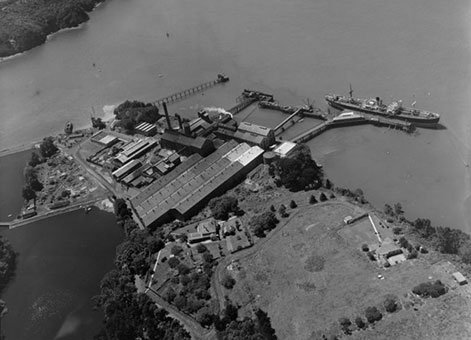 The process of refining sugar involves receiving bulk shipments of raw product from sugar mills that process the sugar cane, mainly in Australia and Fiji. After being unloaded from the ship, raw sugar is stored awaiting purification. The refining process starts when raw sugar is mixed with concentrated sugar syrup to soften the impurities on the surface of the crystals before washing with water and centrifuging to remove the washing water. The washed crystals are then dissolved with hot water before lime and carbon dioxide are added to help remove further impurities. The solution is then filtered through cloths. Char is a charcoal formed from burning animal bones and is used to remove any remaining impurities and colour. The clear liquor is then boiled in a vacuum to form crystals of pure sugar that are then dried and sterilised with ultraviolet light, prior to grading and packing. Residual syrup can be made into brown sugar, golden syrup or treacle.

Until 1961, 90 per cent of the sugar production at Chelsea was shipped across the harbour to the Auckland wharves in a fleet of seven flat bottomed lighters. These lighters were fitted with steam winches and derricks to hoist sugar bags into and out of the hold. The completion of the Auckland Harbour Bridge meant road transport direct from the refinery was soon adopted.

Once city water supply became available in 1960, dependence on the Duck Creek supply diminished and natural gas replaced coal as an energy source. In recent years the company has had a strong environmental and conservation policy. In 2009 it was decided to once again draw and self-treat water from Duck Creek reducing the company’s dependence on city water. Maintaining a high quality water supply for the refining process using activated carbon filtration and ultra-violet light is needed. The company is very conscious of the need to minimise energy use and monitor operations to minimise waste and prevent pollution.

Refinery capacity has been extended many times and over 200,000 tonnes per year is now processed. About 20 per cent is exported, mainly to Australia. 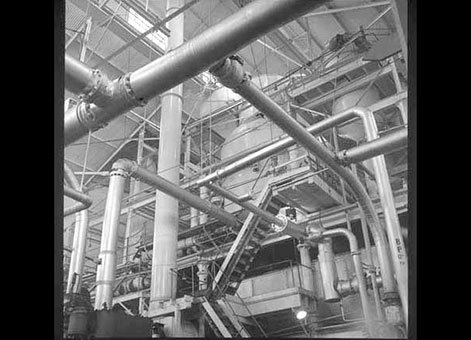 Chelsea Sugar Refinery and the community

To build the works in 1882, 150 men were employed, most living in tents. These men were the first to be offered jobs when the refinery started and 100 took up the offer. A few years after the works were first built, a name was adopted for the refinery and estate which reflected the origins of its first customs officer, Mr Judd, whose home town was Chelsea in London, England. The company’s Chelsea estate included 35 houses for staff, a school and reading room, and privately owned shop. The company ferried staff, materials and equipment across the harbour in the period prior to the completion of the Auckland Harbour Bridge.

In what is believed to be one of the first staff welfare schemes in New Zealand, the company organised a Benefit Fund. This subsidised the deduction of three pence per week from worker’s wages to cover sickness, accident and death. At that time the company also had a policy to take on and train boys, particularly the sons of men employed at the works.

There were labour disputes in the 1920s, and ongoing complaints about the soot from the refinery chimneys blackening Birkenhead washing, tarnished the refinery’s image somewhat. The Great Depression in the 1930s was fiscally difficult for the company, but it stood by its workers as best it could, offering low interest mortgage loans, and not laying-off workers who held one. Some single men and newly married couples had the option of working alternate weeks, but at least their positions were secure.

The growth of Birkenhead has been closely linked with the Chelsea Sugar Refinery. The Borough had a population of 334 in 1886 including 189 who lived at the Chelsea village owned by the company. By 1900 the population of Birkenhead Borough was 1,000, with one third of the men employed as sugar workers. In 1960 the sugar company went on to town water supply and decided to subdivide part of the Duck Creek catchment’s 106 hectares. This formed the Chatswood subdivision of 1,000 residential sections.

Today the Chelsea Sugar Refinery’s park surroundings are used by dog walkers, joggers and duck-feeding families. Throughout the years the company has been generous in allowing public access to its land. Beautification of the site has long been practised. In 1900 the company undertook a re-vegetation programme using both native and exotic species. In 1975 the company won the Waitemata Garden prize for the best factory environment on the North Shore. To ensure the continuance of the park for future generations, 37 hectares of the Chelsea estate were sold to the Heritage Park Trust in 2008. The park adjoins Kauri Point Centennial Park making it the largest bush reserve in close proximity to Auckland.

There is public access to the Chelsea Heritage Estate Park.