New Zealand’s first School of Engineering was founded in 1887 by Canterbury College, with the first laboratory building opened in 1891.

The School was founded by Canterbury College, now the University of Canterbury, itself founded in 1873 as a constituent college of the University of New Zealand. Despite some local misgivings, the College’s Board of Governors resolved to create a School of Engineering in 1887. This was one of only a few in the British Empire at that time. 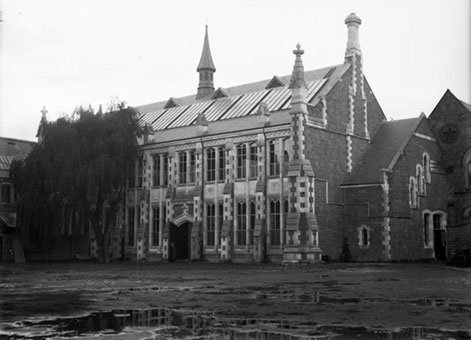 The faculty of the fledging school consisted of:

Charles Henry Herbert Cook, Professor of Mathematics, who was the supervisor and appointed two part-time lecturers

Edward Dobson, Canterbury’s first Provincial Engineer, who was in his seventies when he began lecturing in civil engineering

Robert Julian Scott, Manager of the Addington Railway Workshops, who became the School’s first mechanical engineering lecturer. Fired by a commitment to engineering education, at 28 years old, the immensely ambitious Scott gave up a promising railway career to become the School’s full-time Lecturer in Charge. This title later became Professor, and ultimately, Director in Charge. Initially he declined a commensurate salary increase to ensure the building of an Engineering Laboratory.

Benjamin Mountfort designed the Engineering Laboratory building. At the time Mountfort was considered the province’s leading architect. On the ground floor there were testing, drawing, lecture and model rooms, and above were lavatories and a lecturer’s room. The uses had changed prior to the Canterbury earthquakes of 2011 but this section had only minimal alterations. In 1890 the chairman of the Board declared that the new engineering additions would provide all the accommodation needed for the School, and by 1891 the building was completed at a cost of £2740.

Unfortunately for the expectant Scott, equipment was not provided. It was not until 1894 that the reluctant Board allowed the School to purchase its first major item. This was an experimental steam plant manufactured to Scott’s specifications. The unique and highly flexible experimental engine is on display at the Canterbury Steam Preservation Society’s MacLeans Island Museum.

In 1902, an electrical laboratory was added, followed by a hydraulics laboratory in 1913. The last major additions to the school, new mechanical and electrical laboratories, were nearly complete when ill health forced Scott to retire in 1922. Scott’s energy, enthusiasm and vision had seen a small liberal arts college foster an engineering school that became highly regarded throughout the British Empire.

In all, 1,335 graduates passed through the School between its foundation and the transfer to the new University of Canterbury campus at Ilam in 1960. By modern standards the number is not large; these days there are over 200 University of Canterbury engineering graduates every year. However, these early graduates’ influence was substantial and helped to win the world-wide recognition accorded New Zealand’s professional engineers.

The building is now part of Christchurch's Arts Centre.

This place is part of a Heritage New Zealand Category 1 historic place (List no.7301):

This item of New Zealand’s engineering heritage was recognised as part of the IPENZ “Engineering to 1990” project which the Institution organised to help celebrate the country’s sesquicentenary in 1990. A plaque was unveiled to mark the significance of this laboratory as part of the development of the nation