The first such facility in the world, the Bluff all-weather package loaders were designed and built in New Zealand to permit all-weather loading of frozen meat from rail or road vehicles using conveyors inside a wharf shed. The five loaders were commissioned in 1963 and four of the original loaders are still in use. 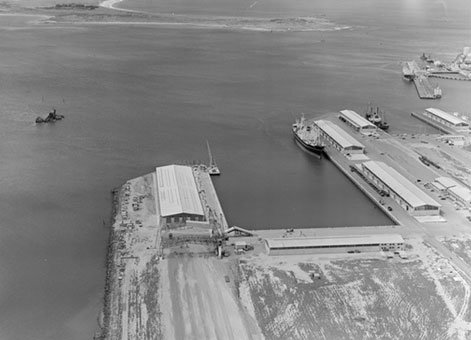 In 1952 the Southland Harbour Board saw a need for speeding up the loading of frozen meat at Bluff's port and incorporated this into a development scheme. In 1953 a Donald portable elevator was purchased and adapted for the loading of carcass and packaged meat. This was in almost continuous use for the loading of vessels for two and half years.

Although the loader had its limitations and could not be fully weatherproofed, it did prove that the mechanical handling of suitable unit cargoes could increase the loading rate. This motivated the Harbour Board to investigate creating a larger system.

The overseas builders of the original Donald elevator were asked to prepare several proposals, but none were thought acceptable. Subsequently, the Board’s engineer (DES Mason), assisted by the design engineer (H Bulters), prepared a scheme. William Cable Limited were then asked to prepare a complete design prior to calling for tenders. They suggested several changes before the final proposal was developed.

The loading equipment consisted of a Transfer Shed 159 metres (m) by 32.5 m, with five lines of rail track and five horizontal belt conveyers. The building had roof hatches through which the loading bights of the five travelling ship loaders could be lowered to take the carcasses off the belt conveyer. The chain apron-type ship loader had a continuous apron, so that carcasses or packages were carried from the belt conveyors through the roof hatches, gantries and luffing booms into the ship’s hold. The conveyors and loaders are weatherproofed.

The system required several staff to operate it. From the cabin all the loader movements were controlled. The hatch operator, stationed in the hold's control box, near and above the discharge end, had access to an emergency stop button and a two-way telephone. Communicating with the control cabin, the hatch operator was able to have the loader started on request, at whatever desired speed. A watersider stationed at the transfer point in the shed was in constant communication with the hatch operator in the ship and the operator, and he also had an emergency stop button.

The five loaders were designed to carry whole lamb and mutton carcasses, each up to 27 kilograms (kg) in weight. The maximum capacity was 2,100 carcasses per hour per machine. Cartons of offal up to 40 kg each, and other packs of suitable shape, can be carried in alternate conveyor pockets at a maximum rate of 1,050 packages per hour.

The loaders are designed to operate in winds of at least 72 kilometres per hour (kph), and when stowed to be stable up to 170 kph. Storm anchors are fitted to prevent movement along the wharf. The travelling ship loaders are capable of loading into the holds of any of the standard refrigerated ships that come to New Zealand.

This item of New Zealand’s engineering heritage was recognised as part of the IPENZ “Engineering to 1990” project, which the Institution organised to help celebrate the country’s sesquicentenary in 1990. A plaque was unveiled to mark the significance of this loading system as part of the development of the nation.

As part of a working port, the all-weather package loaders are not publically accessible.