The Auckland Town Hall was the city’s political heart and is an important part of Auckland’s heritage. From 1994 to 1997 the building underwent sympathetically engineered strengthening to ensure its ongoing viability. 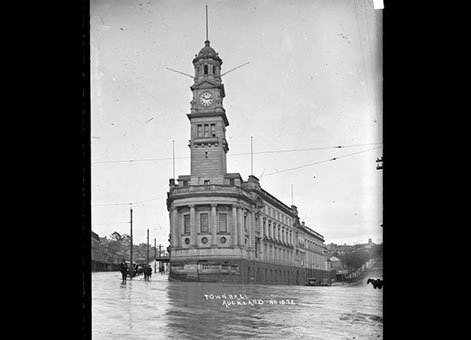 Auckland became a borough in 1851, but this first council only lasted one year and a lack of interest meant no second election was held. It was not until 1867 that Auckland became a municipality. Council affairs were administered from a variety of different offices from that time until the Town Hall opened in 1911.

The architect, J Clark and Sons of Melbourne, won a competition to design the Baroque revival building, reminiscent of the Lambeth Borough Council Hall in London. Clad in Oamaru stone on a base of Melbourne bluestone, it was built by Ferguson and Malcolm of Auckland. Apart from civic offices, the building contained the Great Hall (modelled on Leipzig’s Gewandhaus Concert Hall) and Concert Chamber, seating almost 1,600 and 500 people respectively. 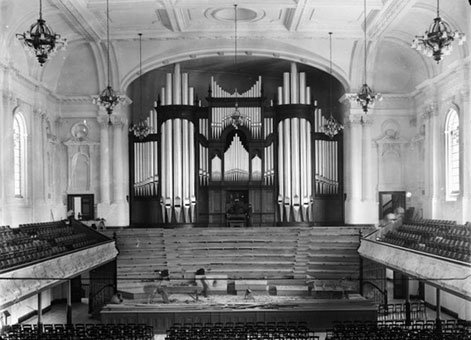 The Town Hall did not meet contemporary seismic protection standards, particularly as a place of assembly, because it was constructed of unreinforced masonry. Valued for its heritage and contribution to Auckland’s artistic and civic life, the building was therefore refurbished in the mid-1990s.

While much of the building could be treated using a standard approach, the Great Hall was challenging and required innovative techniques. The hall is a four-storey-high space, with long high side walls constructed in masonry with a brick core. Fortunately they were buttressed to 1.2 metres thick between the windows.

To hold the top of the walls together a diaphragm of multi-layered plywood was constructed in the roof cavity as a strong, light floor above the ceiling and connected to the walls. Support for the mid-height of the walls was a serious problem and solved by constructing a large horizontal horseshoe-shaped steel truss under the seats of the circle. The flexibility of this truss was matched to that of the walls so they should work in harmony during a seismic event.

A tailored construction method, sympathetic to the building’s heritage values, was adopted for the strengthening of the mezzanine concrete floors in the main entrance. Thin carbon fibre reinforced polymer strips glued to the underside of the concrete slab resulted in improved strength without significantly changing architectural features and ceiling heights.

The triumph of this project was that these structural changes did not have a visual impact in the Great Hall. The success of the methods used to strengthen the Town Hall was a great credit to all involved but particularly to the innovative design team who met the requirements of the City Council economically and effectively.

This place has been recognised by Heritage New Zealand as a Category 1 historic place (List no. 549).

Trevor Robertson, ‘The Strengthening of the Town Hall,’ Proceedings of the 12th World Conference on Earthquake Engineering, 2000, Paper 1155.