Auckland’s comprehensive motorway network had its genesis in the 1950s. At almost 90 kilometres long, the system contains more than 90 bridges, including the Auckland Harbour Bridge. 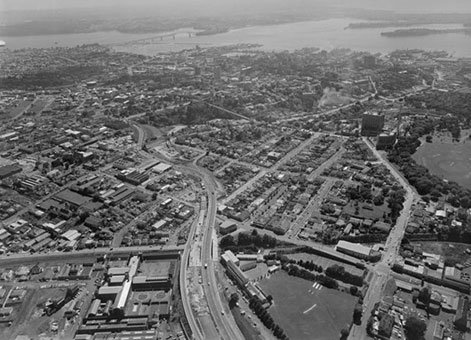 In the early 1950s traffic was getting very congested in the Greenlane area of the Great South Road. It was decided that the best solution to this problem was to start a motorway system and so the first section of the Southern Motorway was built. This was shortly followed by a motorway causeway from Waterview to Te Atatu opening up the whole of West Auckland. Then with the completion of the Auckland Harbour Bridge the first section of the Northern Motorway was built.

Fortunately the Central City section connecting these three motorways was left for a period and the final design was much better than the original plan as experience in the use of motorways had progressed. The major connections within Grafton and Newton Gullies were completed in the late 1960s and early 1970s followed by extensions to the North West Motorway and further extensions of the Northern and Southern Motorways.

Most of the bridges on the Auckland motorways were designed using state-of-the-art prestressed concrete. Many of the bridges in the central city section were built on solid ground with motorway lanes excavated below after completion of the bridges. The Ministry of Works and Development (MWD) completed most of the design for the motorways, but some structures were designed by local consultants. The structures were constructed by many different contractors with overall supervision and earthworks performed by MWD. 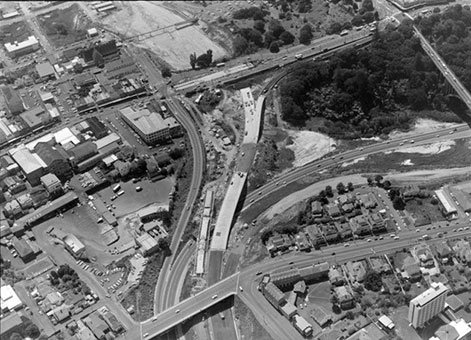 Symonds Street is a main traffic artery leading into Auckland’s central city. A bridge had to be built to take Symonds Street traffic over the motorway. However the alignment had to be identical and no major detours could be made. A major excavation was needed for the motorway at this point. The bridge was built in two sections maintaining traffic flows through half the carriageway at a time, but this did not allow excavation to take place. Therefore construction of the bridge piers and foundation piling was carried out from road level before limited excavation took place.

The Symonds Street Bridge was the first major bridge in New Zealand to use the system of off-site segmentalised span construction followed by epoxy jointing and prestressing to make the finished structure on site. The individual segments each weighing some 20 tonnes were brought to site, placed in position, epoxy glued together, prestressed into single spans, and then further connected together into a three-span continuous structure through a second stage of prestressing. 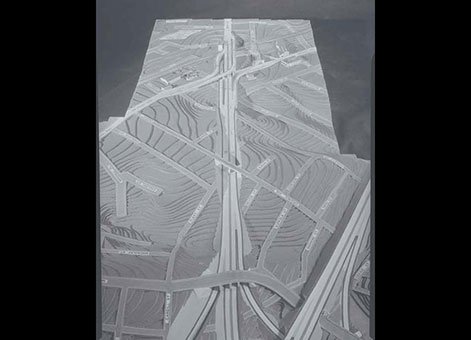 The carriage of the motorway over Newmarket called for a major elevated structure with long spans, S-shaped geometry and varying superelevation. This structure was the first prestressed continuous box-girder bridge in New Zealand and the first such structure constructed without falsework using cantilever construction techniques. It was also the first use of a Freyssinet-type concrete hinge at the base of the columns. 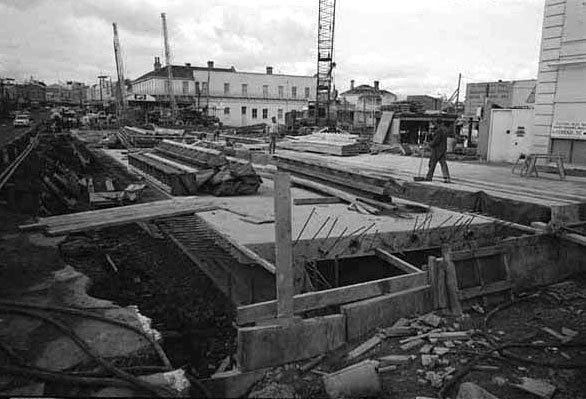 A major retaining wall was a key element in the planning and construction of the Newton Gully Interchange. The wall, together with the Karangahape Road Underpass, makes possible the passage of the motorway at two levels under Karangahape Road. Construction of this wall significantly reduced land and property compensation costs by limiting the area required for the interchange. Both the design and construction technique were unusual at the time (1969–1971).

An NZ On Screen film profiles Auckland and its rapid expansion around 1960. The film covers transport aspects such as the growth of parking buildings, railway and wharf developments, as well as motorway construction (10:37 minutes into the film).

This item of New Zealand’s engineering heritage was recognised as part of the IPENZ “Engineering to 1990” project, which the Institution organised to help celebrate the country’s sesquicentenary in 1990. A plaque was unveiled to mark the significance of this motorway system as part of the development of the nation.

Looking east along Karangahape Rd between Cobden Street and West Terrace (formerly West St). Showing the construction of the Newton Bridge for the Karangahape Road under pass, with several cranes in the foreground, and the premises of Atlas House on the corner of West Street, 22 July 1969. Sir George Grey Special Collections, Auckland Libraries, Record ID: 7-A4250.