Donald McLeod was born in Scotland in 1835. He trained under Alexander Gibb, Civil Engineer, in Aberdeen until 1857. 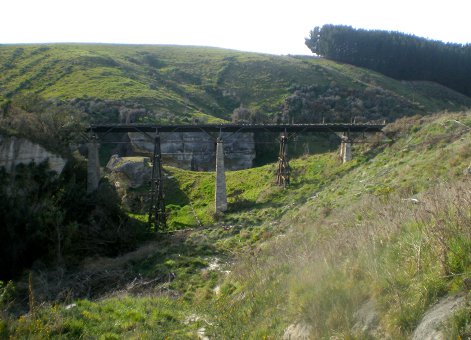 In 1859 he was engaged on railway construction in the Highlands of Scotland. Later, he was employed on railway and general engineering work at Dingwall until 1864. His work covered canals, harbour and water works.

McLeod soon immigrated to New Zealand with his wife and child because he was selected for the position of Wellington Province’s Chief Engineer. This appointment was gazetted at £500 per annum on 4 February 1865. He held this position for about six months before being dismissed for unsatisfactory performance. McLeod then seems to have entered private practice as an engineer and surveyor.

McLeod joined the Public Works Department on 16 December 1872, and was employed on railway construction in North Otago.

In 1875 Oamaru decided to proceed with considerable works and advertised in Australia and New Zealand for an engineer at £1,000 per annum. McLeod was selected “although a local man”. In 1876 he recommended the scheme put forward some time previously by Barr and Oliver for a water supply from the Waitaki River, and with certain modifications and elaboration of details, it was adopted. The scheme was ambitious in view of the small population, even at its original estimate of £65,000, but it eventually cost £145,833. Perhaps £20,000 of the difference was for work not proposed at the initiation.

The Oamaru contractor went bankrupt in 1878 and McLeod took over personal control, working largely through sub-contractors and piece workers. His salary was reduced to £750 on account of a slump. On completion of the works charges amounted to £10,000 per annum, largely due to loans at seven per cent, while the population was under 4,000. At one stage a sub-committee walked over all the works and interviewed workers and others and took evidence and reported favourably in spite of the great excess cost. Later Harry Pasley Higginson (1838-1900) said that the work was well engineered and the scheme sound. Oamaru was now financially embarrassed. McLeod's salary was further been reduced so he resigned in July 1880, just before the water was turned on.

McLeod produced a report in 1882 on a water supply scheme for Christchurch by gravitation from artesian wells close to the Waimakariri River. This was advanced as an alternative to Messrs. Dobsons' pumping scheme from wells in the city, with boosting pumps giving 360 feet head for firefighting. McLeod's scheme was not adopted.

It is unclear when McLeod died, but he was known to have been engaged by the Public Works Department during the construction of the Inch Valley Lime Kilns railway from July 1898 to June 1899.