Arthur Mead was born in Taranaki in 1888. He grew up at Maungakaramea, near Dargaville, where he went to primary school. 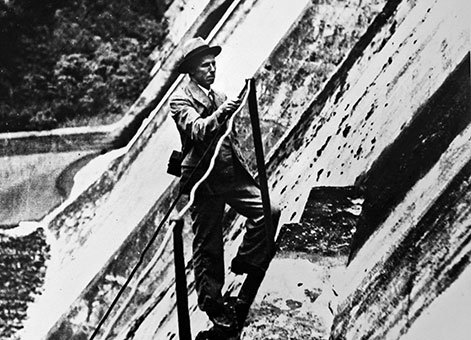 In 1904, at Whangarei High School he won a Junior University Scholarship. His father, also named Arthur David Mead, was a farmer who drowned in the Wairoa River in 1892 leaving his mother Elizabeth to bring up David and his younger brother William. William also went on to become an engineer, initially with the New Zealand Railways Department.

Arthur’s study towards an engineering degree began at Auckland University College in 1905. At that time it was necessary to complete the degree course at Canterbury University after doing the first year in Auckland. Celebrated electrical engineer, Lloyd Mandeno (1888–1973), went through university with Arthur. According to Lloyd’s memoirs, during the 1907 Easter holidays he, Arthur, and two others, biked over the Porters and Otira passes to view the railway construction. Along the way they also climbed Mount Torlesse. Arthur graduated with a Bachelor of Engineering from the University of New Zealand in 1911.

In 1910 Arthur gained employment at the Auckland City Council. He was sent into the Waitakere Ranges for the survey and design work on the Upper Nihotupu and Huia Dams. In 1915 Arthur led a survey party to investigate all possible water sources in the Waitakere ranges. He prepared an aqueduct design to collect water from the creeks along the Piha valley southward to Whatipu and Huia. The 30-mile long aqueduct, with many tunnels and bridges, would gravitate to Khyber Reservoir with a fall of 60 feet. Waterworks Engineer James Carlaw saw larger water supplies would be needed, and that water would eventually be used from the Waikato River, so most of Arthur’s aqueduct did not eventuate. However, short sections were built from Mackies Rest to Huia Filter Station, and the tunnel from the Huia Valley through to the Nihotupu valley.

Later in 1915 Arthur left for France with the 24th Reinforcements to participate in World War One. He served in France and Belgium as an infantryman in the Medical Corps of the Auckland Rifles, winning the Military Medal at Passchendaele.

After the war, Arthur resumed his position at the Auckland City Council. Arthur later became Secretary of the New Zealand Society of Engineers Auckland Branch in 1924. In 1929 he was promoted to Waterworks Engineer, a position he held until his retirement in 1953. During 1937, as the Auckland Branch Chairman, he led a deputation to the Auckland City Council Works Committee asking that the Beam Engine pump at Western Springs not be sold for scrap because it was “of such great mechanical and historic interest”. This object is now the central feature at the Museum of Transport and Technology (MOTAT).

In 1940 the Auckland Centennial Memorial Park was formed initially with 9,000 acres and Arthur became the Board’s Secretary and the Supervisor of the park. He carried out these tasks in addition to his job as Waterworks Engineer. When he retired his Auckland City Council position he continued as the Board’s Honorary Secretary until 1972. At this time Arthur was 84 years of age.

Sometimes Arthur’s recreational and professional lives crossed over. He was a keen tramper and his maps of the Waitakere and Hunua Ranges, mainly for water supply, were the first maps of these areas and widely used by trampers. In association with the Auckland Federated Mountain Clubs, Arthur was responsible for naming the Waitakere Ranges tramping tracks, an important task in terms of search and rescue. Bob Ussher said that Arthur “was well known and very well liked for his sympathetic views on the recreational requirements of the tramping clubs and botanical societies. It was through his goodwill that the Alpine Sports Club (ASC) had a bush hut on council land in the Hunuas – called “Runnymead” in his honour. He was held in such high regard that ASC made him an Honorary Member.”

Arthur was also a foundation member of the Avondale Baptist Church which he helped to establish in 1926. Furthermore, he was a keen supporter of the church’s Boys Brigade. According to Tony Goodwin, who was involved with the Brigade, Arthur was influential in establishing a temporary cookhouse in 1950 at their camping site on council land in the Huia Valley.

Arthur and William were responsible for starting the Ruapehu Ski Club in 1913 after they had each made their own wooden skis. Arthur’s first effort was in Kauri but later he found southern beech was better. Mead’s Wall at Ruapehu is named after the two Mead brothers.

Arthur also became a distinguished botanist, receiving the Loder Cup in 1972 for his services to botany. Gerald Loder donated the cup in 1926 to "encourage and honour New Zealanders who work to investigate, promote, retain and cherish our indigenous flora". The citation for Arthur’s award stated that:

Mr Mead played an active role in the preservation of the Waitakere and Hunua watersheds. He ensured restriction of access and introduced other measures to safeguard the catchments, but he also encouraged the establishment of tracks and lookouts so those interested in these valuable forest areas could make use of them for study and recreation. Mr Mead also urged the establishment of the Auckland Centennial Memorial Park Board which by 1972 managed 14,000 acres of hill forest.  He regularly led nature groups and societies into the Park and helped with the building of tracks. He also helped develop the Tongariro National Park. As an author he published a description and check list of Waitakere naïve flora, contributed papers to the Journal of the Polynesian Society, and, being especially interested in the Maori and European history of the area, wrote a handbook on the Whanganui River.

Arthur wrote extensively, drawing on his engineering expertise and interest in the natural environment. Publications include:

The Waitakere Ranges and their Forest Parks, Auckland Centennial Memorial Parks Board, Auckland, 1969.

Peter G Lowe, ‘Some professional engineers working in Auckland in the first half of the twentieth century,’ Paper presented at 9th Institution of Engineers Australia National Conference on Engineering, March 1998.