The first Newmarket Viaduct, constructed between 1962 and 1966, was a vital link near the start of Auckland’s Southern Motorway and was the largest prestressed concrete bridge in New Zealand at the time. 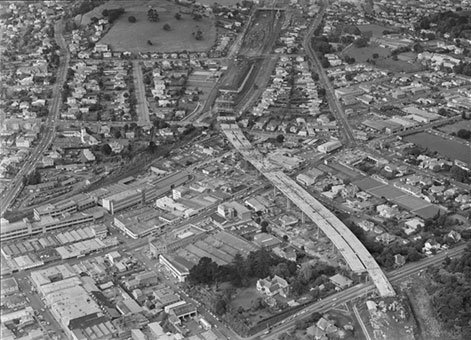 This first bridge was replaced in a four-stage process between 2008 and 2012. The replacement viaduct’s innovative design addressed seismic considerations and considered environment issues, such as minimising the noise created by traffic on the bridge.

The first viaduct over Newmarket

The original Newmarket Viaduct was a massive structure towering over 45 metres (m) above the old Borough of Newmarket. It was described by the New Zealand Herald in June 2007 as “one of the most distinctive engineering features of New Zealand”. It was 689 m long and 27 m wide, and designed by the Ministry of Works for the National Roads Board at a cost of $2.26 million.

When the viaduct was first considered a steel girder structure was mooted, but the cost of imported steel and the prospective maintenance costs led to a concrete structure being proposed. A prestressed concrete box girder structure was favoured because it had to cross a busy urban area, major roadways and a dual track railway. The twin parallel structures had a longitudinal “S” curvature and super elevation (cross slope to allow for high speeds).

The viaduct was a very complex structure for its time. There were 16 spans varying in length between 33.5 m and 50 m. Its construction, using balanced cantilevers, was from each supporting column, progressively moving out from each side to meet in the middle.

As each new 3.2 m long section was added it was tied back to previously erected units by prestressing cables. This process continued until finally the cantilevering spans from adjacent piers were closed at mid span. Further prestressing cables were then threaded into the units to tie the whole structure together. Precise calculations of the loads in each prestressing cable were necessary. The design included a dynamic analysis for loads able to withstand a one in 500 year earthquake.

Of particular interest in the engineering world was a problem which occurred early in the viaduct’s life. This was caused by a temperature differential between the deck which had a black bitumen wear coat, and the bottom of the beams which were light coloured concrete. This caused some cracking of an unacceptable level that had not been experienced as a design problem before. The solution saw additional prestressed cables installed and light coloured stone chip laid on the black bitumen road surface. 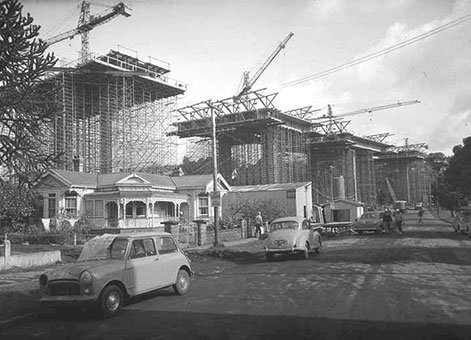 In 2007, the 1960s viaduct carried an average of 163,500 vehicles per day making it one of the busiest sections of Auckland’s motorway system; clearly more lanes were needed.

Rather than upgrade the original viaduct, the owners decided to replace it. The NGA Newmarket Alliance was formed to complete the project. The Alliance consisted of the NZ Transport Agency, Beca, Fulton Hogan, Leighton Contractors, VSL New Zealand, URS, Tonkin and Taylor, and Boffa Miskel.

While there is capacity to add a fourth lane to the northbound side, other capacity restrictions around Spaghetti Junction (the junction of the motorway systems at Newton) led to a decision to exclude the extra lane as part of this project.

This is part of Auckland's motorway and is open to traffic at all times. The structure can be viewed from below at Broadway Newmarket or from above from Mt Hobson Domain.