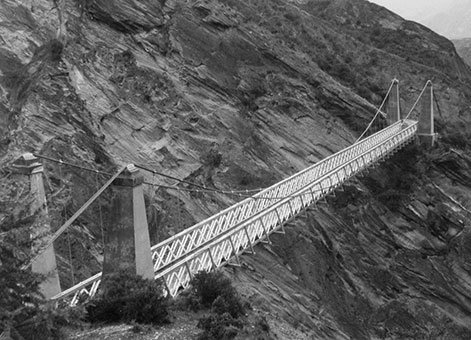 The Skippers Canyon Suspension Bridge was part of a project undertaken by the New Zealand Government and Lake County Council to open up the area surrounding the Shotover River to gold mining. Skippers Road was substantively finished by 1890. However, heavy quartz gold mining equipment required a bridge with greater capacity than the existing one. Therefore, County Engineer, John Black (1856–1914) designed a new bridge. Construction by Naseby’s A.J. Fraser and Company began in 1898 but was hindered by having to tunnel deeper than expected for the anchorages, as well as the contractor’s financial position meaning materials were delayed. The bridge was officially opened by the Minister for Mines, James McGowan (1841–1912) in March 1901. Even though the settlement at Skippers was abandoned by the 1940s, the bridge remained in use by local farmers, and following the creation of the Mount Aurum Recreation Reserve in 1985, it now provides access to the remains of the former settlement. As a visually impressive structure, it is also an iconic feature of the Shotover River and continues to play an important role in local tourism.

The Film Archive's catalogue features a 1928 New Zealand Government Publicity Office film of the Skippers Road and the bridge (at 7:40/-0:50mins through the clip).

The bridge is 91.4 metres (m) above the river, making it the highest suspension bridge in New Zealand. This single lane traffic bridge is 2.2m-wide and its span is 96.3m. The deck and stiffening truss were constructed in timber. One of a group of late 19th century Central Otago suspension bridges, the Skippers Canyon structure’s reinforced concrete towers are an interesting departure from the more typical masonry towers of its counterparts.

The Skippers Canyon Suspension Bridge is a special and dramatic structure of engineering and historic value. It is important because it is one of the highest and longest span late 19th and early 20th century New Zealand bridges. The use of reinforced concrete in the bridge’s towers reflects this material’s growing popularity in bridge building at the turn of the 20th century. The remote location posed considerable challenges for engineers and contractors, and therefore it is also a testament to their professional skill.

The Skippers Canyon Suspension Bridge was added to the IPENZ Engineering Heritage Register on 28 May 2013.

Across the Upper Shotover at the north end of Skippers Road, Skippers, Central Otago.