Until 2011 the Kopu Bridge was part of State Highway 25, spanning the Waihou River just south of Thames. Completed in 1928, it is significant as the sole remaining example of a swing span bridge in New Zealand. This type of bridge opens to let river traffic through, much like a gate. 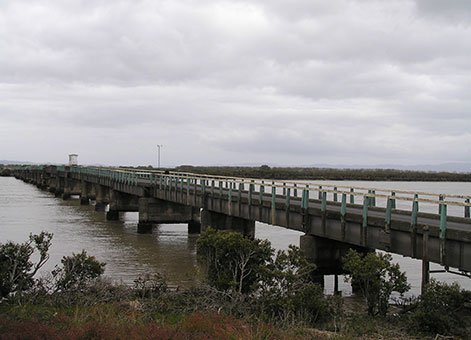 While the early prosperity of the Hauraki-Coromandel region was derived from timber, gold, and kauri gum industries, the early 20th century drainage and development of the Hauraki Plains led to a boom in dairy farming. A need for increased access resulted. Discussions about the need for a bridge crossing the Waihou River close to the river mouth had begun as early as 1911. Residents considered the resulting bridge one of the most important public works in the district. The Kopu Bridge provided an important link between Thames and the Hauraki Plains, and considerably shortened the distance between Thames-Coromandel and Auckland. The project was undertaken by the Public Works Department (PWD), with a significant financial contribution from the recently established Main Highways Board.

After World War Two the bridge became increasingly important for providing passage for the growing amount of traffic between Auckland and the Coromandel Peninsula. A decline in river traffic meant that the swing span was retired from regular openings in the late 20th century, but has continued to be opened by arrangement for special occasions until the late 20th century. By the early 1990s the Kopu Bridge had become the most heavily used single-lane road bridge in New Zealand. The Kopu Bridge was no longer able to cope with the peak traffic of the holiday period, therefore in late 2011 a new two-lane bridge was completed immediately upstream of the existing structure. Currently, the future of Kopu Bridge is uncertain. 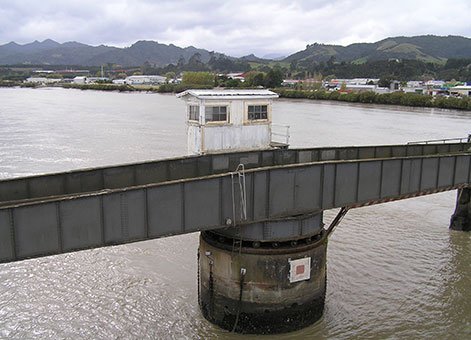 The Kopu Bridge is a structure of importance to New Zealand’s engineering heritage. This is largely because of the provision made in its design to allow the considerable amount of river traffic which once operated on the Waihou River to pass under or through it. It is also indicative of a period when New Zealand transport was changing, and roading began its challenge to rail and shipping as the dominant means of passenger transportation. The Kopu Bridge is also the legacy of the skilled PWD engineers, John Ernest Lelliot Cull (1879-1943) and Onslow Garth Thornton (1890-1972), who found creative solutions to the unusual set of circumstances particular to the site.

Kopu Bridge was added to the IPENZ Engineering Heritage Register on 24 April 2012.

This place has been recognised by Heritage New Zealand as a Category 1 historic place (List no. 4681):

There is no public access to the bridge. However, it can be viewed from the river bank or pedestrian lane on the neighbouring state highway bridge.