Opened in late 1908, the North Island Main Trunk railway (NIMT) linked Auckland with Wellington, Taranaki and Whanganui, and contributed to the development of the central North Island.

Made possible by pioneering engineering amid the challenges of a frontier land, and lately enhanced by modern technology, the NIMT is New Zealand’s most significant land route.

Earnest planning for the railway began in the 1870s with the Public Works Department's first Engineer-in-Chief, John Carruthers, and other engineers and surveyors, such as John Rochfort, scoping possible routes.

Most of the construction work had to be carried out by hand. Oxen, horses and small steam locomotives assisted with the bulk movement of materials. It was only in the last two years that one of New Zealand’s first steam shovels was brought in to help dig the cuttings. That was the start of a mechanical age in earthworks for this country.

The line traversed some extremely challenging terrain, especially between Te Kuiti and Marton, which posed many problems for the engineers locating the route.

The location of the Raurimu Spiral about 1898 by R. W. Holmes (1856–1936)  was the key to a workable climb from Taumarunui to the National Park summit. At that time detailed location of the final line was still a field engineer’s decision. The required 132 m rise over a distance of 2 km in a direct line was achieved by the use of the famed “Spiral” loop and horseshoe curves using the topography very skilfully to minimise cut, fill and tunnelling. 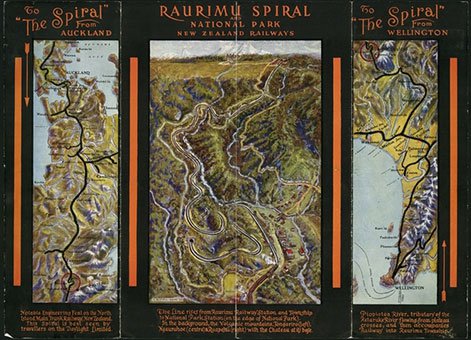 The bridgeworks designed by the Public Works Department (PWD), and built by the PWD and engineering firms such as Andersons Limited of Christchurch, were to the best standards of the day and were surprisingly modern. The Mangaweka Viaduct (now demolished) was typical of many of the major structures on the North Island Main Trunk. Most of these viaducts had their steelwork fabricated in the pioneering settlements such as Mangaonoho and Makatote. (There is still an Ironworks Road at Mangaonoho, although the sites of both workshops are less obvious).

Andersons’ workshop at Makatote Viaduct was extremely well equipped for its time. It had electric overhead travelling cranes and the cableway used to erect the viaducts was electrically controlled as well. 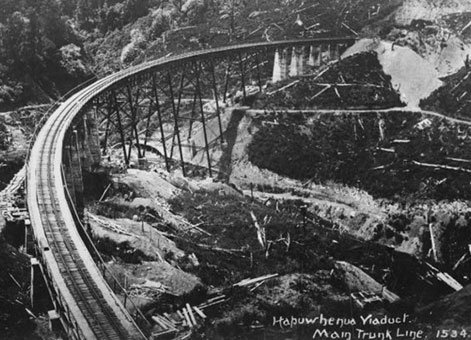 After the completion of the railway the Government purchased the Wellington and Manawatu Railway, which meant that the entire route from Wellington to Auckland was now owned by the Crown.

The design loading for bridges and viaducts was an engine of 84 tons, although the 94-ton “X” Class were used from the opening of the line. Following detailed strengthening these structures have carried the 145-ton “K” and “Ka” locomotives, while those retained on the now electrified route carry the 106-tonne “30” Class electrics of even higher axle loading than the steamers.

The electrification of the NIMT in the 1980s was another significant period of change. 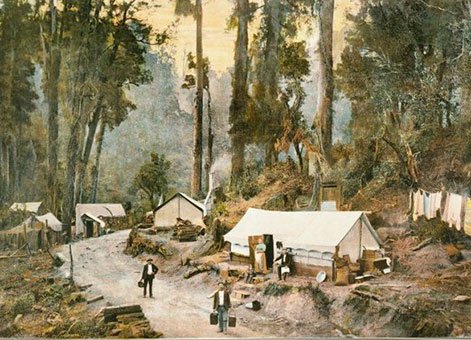 A scene on the route of the North Island main trunk railway at the Hapuawhenua viaduct, near Ohakune. Alexander Turnbull Library, Wellington, New Zealand.

The central section of the NIMT has been recognised by Heritage New Zealand as a historic area (List no.7793):

This item of New Zealand’s engineering heritage was recognised as part of the IPENZ “Engineering to 1990” project, which the Institution organised to help celebrate the country’s sesquicentenary in 1990. A plaque was unveiled to mark the significance of this rail line as part of the development of the nation.

At various stages it is adjacent to State Highway 1 (Auckland to Hamilton and Waiouru to Wellington).  Through the central North Island (Hamilton to Ohakune) its route is similar to that of State Highway 4.

The monument celebrating the Last Spike is near the Manganui O te Ao River on State Highway 4.

Next to State Highway 4 at Raurimu there is a viewing platform for the Raurimu Spiral.

A L R Merrifield; 'A Centennial Review of the North Island Main trunk Railway: Geology of the West-Central North Island and its Influence on Transport Development,' Proceedings of 3rd Australasian Engineering Heritage Conference, 2009.

The North Island Main Trunk goes from Auckland to Wellington. It travels through Auckland, Waikato, King Country, the Central Plateau, Wanganui/Manawatu and Wellington/Kapiti.