The North Island Main Trunk railway between Mangaweka and Utiku originally followed a tortuous route along narrow benches some 100 m above the Rangitikei River in the Central North Island. Steep gradients, tight curves and narrow tunnels made it a difficult and costly piece of line to operate and maintain in this geologically unstable and seismically active region.

Therefore, New Zealand Railways (NZR) decided to re-route rather than upgrade this stretch of line. Contracts for the bridges were let in 1972 and the deviation was opened to traffic in November 1981.

The chosen route crosses the Rangitikei River plains, and to achieve a suitable alignment, required the bridging of three major river valleys. These bridges, which are major structures by any standard, presented a challenge to engineers to establish a high level of earthquake resistance at an acceptable cost.

The North Rangitikei and Kawhatau gorges called for a column free span in excess of 100 m, while the South Rangitikei Viaduct, whose piers tower 76 m above the river, has a total length of 315 m.

In 1982 the Ministry of Works won the IPENZ Environmental Award for the rail deviation project.

After development of the preferred alignment by the NZR, tenders were called for the largest structure on the new deviation, the South Rangitikei Viaduct. NZR engineers had prepared a design using structural steel plate girders, but encouraged alternative tenders with the aim of obtaining the most competitive prices. 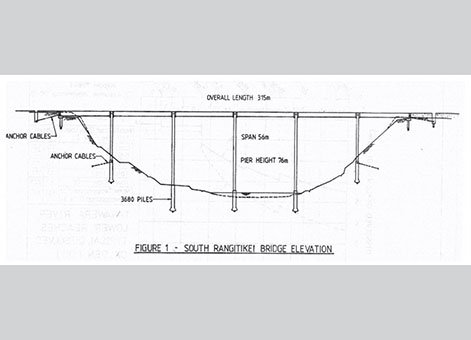 The tender by Codelfa Construction Limited, based on the bridge design by Beca Carter Hollings and Ferner Limited (BCHF), was the lowest lump sum tender. The design was for a prestressed concrete box girder deck, 315 m long with maximum span of 56 m supported on twin piers rising 76 m above the river bed. The design concept permitted the provision of unusually high levels of resistance to earthquake induced loading. The construction method used a self-launching steel false-work system and involved only minor earthworks so there would be minimal disturbance to the surrounding landscape.

Prior to the acceptance of the tender, NZR requested Codelfa and BCHF jointly consider the possibility of modifying their design to become "base isolated". NZR's studies had shown this concept could lead to a very high level of earthquake resistance with little cost penalty. Their designs, incorporating inclined leg piers were tabled and discussed.

The tender design was reviewed and it was decided this concept could be incorporated into the design in a modified form. A new tender of $1,516,000 was submitted and accepted by NZR on 12 September 1972. At the same time it was agreed that the designer, BCHF, would be commissioned directly by NZR for design, and contract administration in the traditional role of consultants for civil engineering structures.

Read more about the development and testing of the viaduct's "base isolation"   |  273.1 KB 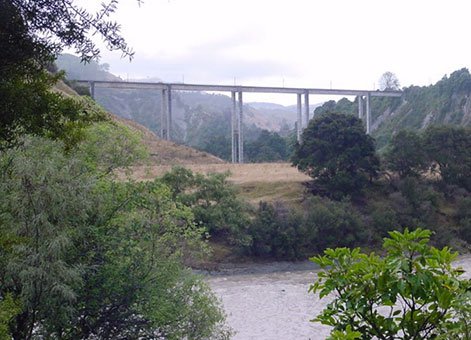 Two valleys in the deviation were similar in size and nature allowing the same design to be used for the North Rangitikei and Kawhatau Viaducts. The design is a prestressed concrete box girder spanning 110 m across the gorge and rising 70 m above the river bed. The bridges have shorter end spans giving a total length of 182 m. Construction was by the cantilever method using a mobile formwork system and cast in place concrete. The structural depth varies from 3000 mm at midspan to 7750 mm at the main piers.

The original intention had been that the launching girder used by Codelfa Construction at the South Rangitikei site would be transported to these two sites. A similar construction technique using tall piers and 56 m spans was to be adopted. A contract for this work had been agreed. However, when it became clear that the launching girder would not be available in time, this contract was set aside by mutual consent and tenders called for a separate contract. The lowest conforming tender was for the cantilever design and was submitted by Wilkins and Davies Construction Company. 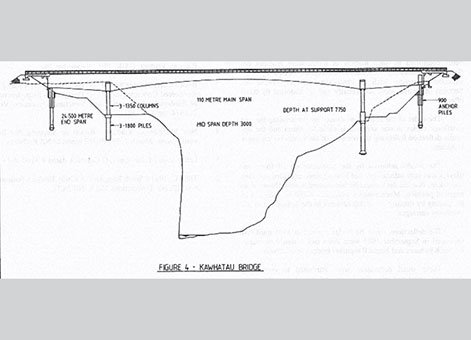 Some of the major works included in the deviation project are part of a Heritage New Zealand Historic Area  (List no. 7793):

L Gavin Cormack, 'The design and construction of the major bridges on the Mangaweka Rail Deviation', Transactions of IPENZ, Vol. 15:1/CE (March 1988), pp.16-22.