The Kawarau Falls Dam, completed in 1926, is located at the head of the Kawarau River where it arises at the outlet of Lake Wakatipu in Central Otago. To the casual observer it might be mistaken for a bridge since State Highway 6 passes along it. However, it was built as a mining dam, albeit an unusual one. 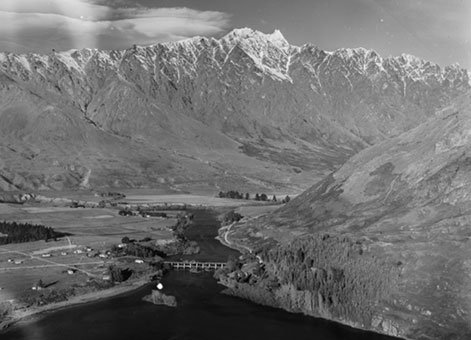 The object of building it was to dry up, more or less, the riverbed down the Kawarau River so that a treasure trove of gold supposedly located in the bed could be recovered. As it turned out this object was frustrated by the return flow of the Shotover River that enters the Kawarau River just before the gorge. The dam project was deemed a failure. The Kawarau Gold Mining Company was formed in 1922 to build the dam and the story of the project’s promotion, building and, eventually, abandonment can be found in the book Walls for Water – Pioneer dam building in New Zealand.

The dam has 11 concrete piers each 2.1 metres (m) thick and 15.5m long. The steel gates that fit between the piers are 12.2m long and 2.3m high. The gates are of the Stoney Roller design, an arrangement where the water load on the gate is transferred to the piers by a set of rollers held in a steel frame. When the gate is lifted or lowered the roller assembly moves independently from the gate thereby minimising the frictional resistance. This type of gate was invented and patented by FGM Stoney in the late 19th Century. He became the Works Manager for the well-known Ipswich firm Ransomes and Rapier in 1887. That company became the sole manufacturers of the Stoney Roller Gates. The use of this type of gate for the Kawarau Dam may be the earliest use of Stoney Roller Gates in New Zealand. They were also installed at a number of hydro-electric dams in subsequent years.

The building of the Kawarau Falls Dam was not a simple task. Over a 20-day period in December 1925 the lake rose 2.3m. To build the piers it was necessary to coffer dam around them with gabions placed in 6m of water flowing at 1.8m per second. For piers 6 and 7 the concrete coffer dams were arches. By agreement with the government the dam crest was to be a bridge to take the main highway south.

Following the failure of the enterprise the dam became the property of the Crown and for a brief period was occasionally used to control the flow for hydro-electric purposes. Hand winches on the deck were the only way to raise and lower the gates although in later years a low speed drill motor was used to drive the gearing.

This structure is accessible by road and can be viewed from various spots along the banks of the Kawarau River at Frankton.