At this tramway system’s peak, the South Island city of Christchurch had New Zealand’s most extensive electric street tramway. In the late 20th century small sections, which were reinstated, became well-known heritage features.

Christchurch’s tramway began to develop in 1880 when a standard gauge line was built from the city’s railway station to Cathedral Square in the centre of the city. Five Kitson steam tram motors originally hauled double-decked trailers. These steam tram motors were used for occasional duties through the electric era, and one – the only operational Kitson in the world – survives in use today at Ferrymead Heritage Park. Horses were also extensively used. Three companies built and operated the initial 19th century network.

In 1903 a Tramway Board was established and it set about electrifying and extending the system. The Board’s first electric line opened in 1905 to the northern suburb of Papanui. It took about ten more years to electrify all the steam operated routes. The extensive use of trailers was an unusual feature of the system. Most of the Victorian rolling stock continued to be used throughout the electric era. The last new line was built in 1922, but low-density routes began to be abandoned eight years later. 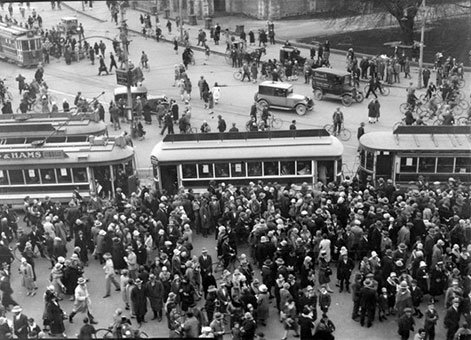 Christchurch Tramways did not enjoy the financial security of the other large city tramways in the pre-motorcar era because of the low density of settlement along many lines and the city’s flat terrain being perfect for cycling. They were always a shoestring operation. Despite this the Tramway Board was quite progressive. For example, the first electric trams had heaters, air brakes and other features not seen elsewhere in New Zealand for some years. The fleet of powerful four-motor cars with automatic acceleration introduced in 1922 were also progressive for their time. These cars were later converted to ‘single-ended’ configuration, unique in New Zealand. In 1931 the Board also became an early adopter of trolleybuses.

The last original Christchurch electric tram line closed in 1954 and all its trams were dismantled – their metal parts scrapped and their wooden bodies sold for use as sheds and seaside or mountain holiday accommodation.

In 1960 a local group of enthusiasts began collecting all the equipment they could with the object of being able to run trams in Christchurch again, “somewhere, sometime”. They were inspired by what was being done overseas to preserve operational trams. Sympathetic people in the management of the Christchurch Transport Board (formerly Tramway Board) were willing to help. In 1964 the group adopted the name Tramway Historical Society (THS) and gave public rides on the surviving single-deck horse tram on a short stretch of remaining tram track at Papanui. The resulting publicity boosted THS’s profile and support.

The THS was a founding participant in Ferrymead Historic (now Heritage) Park and were able to build an electric tramway route there. From those beginnings, both Ferrymead’s park and the tramway have grown. Slowly, over the years, a number of former Christchurch trams were restored to operational condition. As Ferrymead Tramway matured, more visionary thoughts began to emerge. What if a tramway could be re-established in the central city? 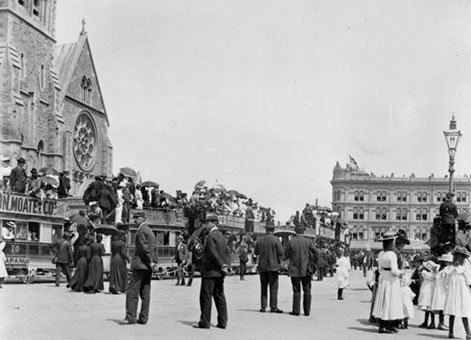 THS approached the Christchurch City Council with a proposal for a circular route around some of Christchurch’s central city iconic historic sites. The plan had potential to significantly enhance the tourist experience of the city. Aided by a sympathetic council planner, the proposal eventually worked its way through formal approval processes.

The resulting central tramway opened in 1995. The City Council built the fixed equipment, electrical and track. THS provided authentically restored trams from Ferrymead for operation, including No. 11, a little four-wheeler formerly used in Dunedin. Later two ex-Melbourne trams were added, one of which was fitted for use as a travelling restaurant in the evenings.

The central city tramway was the first new operation to be licensed under modern national rail safety regulations. In 2009 an extension was being built through another pedestrian mall and there was an extension planned to provide a streetcar circulator-type service to the city’s polytech campus, more than doubling the length of the tramway.

However, the central city tramway was out of service after the Canterbury earthquakes of 2010–11, with the tramcars transported to Ferrymead for maintenance and upgrading. They were stored there until November 2013 when stage one of the tramway was reinstated. The return of this well-loved part of the central city was seen as a milestone in Christchurch’s post-earthquakes recover.

Access to the tramways at Ferrymead Heritage Park and the central city have admission fees and set operational hours.