In the early 20th century, ferry transport played a vital role in the social and commercial life of Auckland city. By 1904 ferries were running from the Auckland wharves to Bayswater, Birkenhead, Chelsea, Devonport, Kohimarama, Northcote, Orakei, St Heliers and Stanley Bay.

The Auckland Harbour Board’s Chief Engineer, William Henry Hamer (1869–1940), believed the ferry and wharf facilities were completely inadequate. He was asked to prepare a comprehensive scheme in 1904. Among other port improvements, he recommended a purpose-built ferry building at the end of Queen Street with a ferry basin immediately in front. 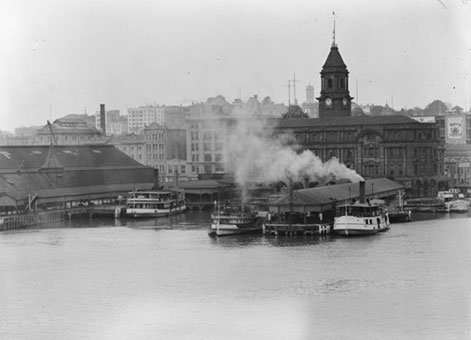 The Harbour Board approved Hamer’s report and decided that the building would house all the ferry companies. This meant that the Ferry Terminal was one of the earliest Auckland buildings built entirely for lease.

The original proposal was for a five storey structure. However, many Aucklanders complained that the building would ruin the view down Queen Street. Eventually agreement was reached for a four storey building with a tower, designed by Alexander Wiseman and built by W Philcox and Sons. 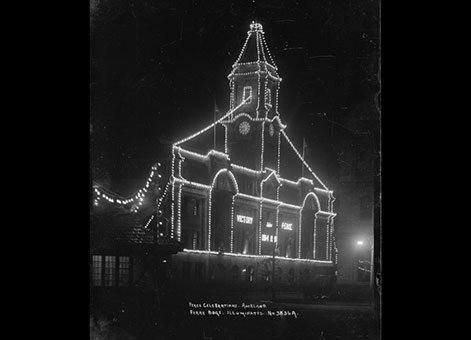 The Imperial Baroque style building’s base consisted of Coromandel granite and it was faced with Pyrmont, a Sydney sandstone. It is said to be closely modelled on the Port of San Francisco’s Embarcadero waterfront ferry building. Auckland’s Ferry Terminal was constructed over two and a half years and completed in 1912.

A time ball was installed in the building, the belief being that it would be more accurate for setting the ships’ chronometers than a clock, much like the time ball at the Harbour Board building. However, it proved to be impracticable, for an unknown reason, and was replaced with a clock and siren. 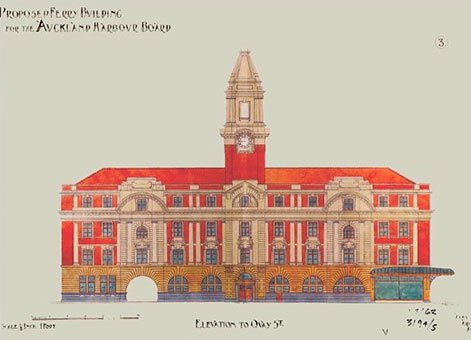 In 1982 a report stated that the building did not comply with current seismic requirements and fire codes. The estimated cost of upgrading was $6.6 million. By this time a new Harbour Board building was complete and the remaining Board Staff withdrew from the Ferry Terminal building.

A prominent Board member was strongly of the opinion that if upgrading was to cost more than $1 million the building should be pulled down. However, there was strong public desire to see it retained. 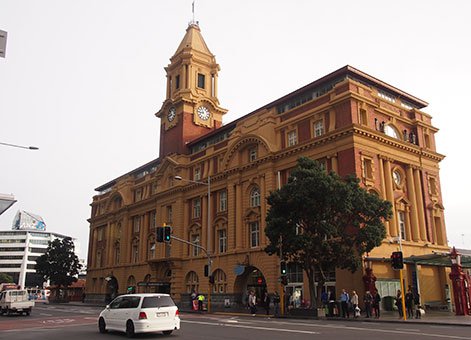 Auckland Ferry Terminal from the corner of Queens Street, May 2015. Engineering New Zealand.

Four proposals were received for redeveloping the building and Challenge Properties Limited’s was accepted, with the condition they had the leasing rights for 100 years. They planned to create an extra floor, redistributing the levels by utilizing the original high stud and raising the roof a small amount above the existing parapet. The $8 million cost included restoring the exterior of the building. Governor General Sir Paul Reeves (1932–2011) opened the upgraded building on 5 November 1988. 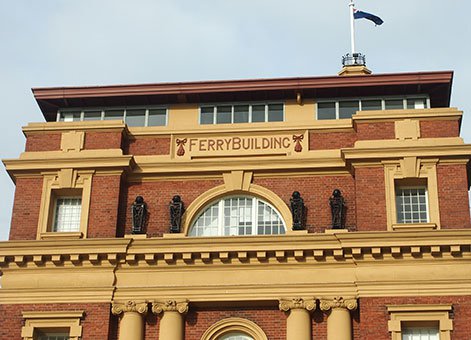 This place has been recognised by Heritage New Zealand as a Category 1 historic place (List no.102):

This item of New Zealand’s engineering heritage was recognised as part of the IPENZ “Engineering to 1990” project, which the Institution organised to help celebrate the country’s sesquicentenary in 1990. A plaque was unveiled to mark the significance of this building as part of the development of the nation.

The Ferry Terminal building is available for external viewing at all times from Quay Street and various location around the Auckland waterfront.