Built between 1924 and 1929, the Arapuni Power Station and Dam was the first government-built high dam constructed on the Waikato River. It pioneered the development of the Waikato Valley Hydro Electric Power Programme which was carried out between 1929 and 1966.

In 1923, worldwide tenders were called for the building of Arapuni and access to the site from Putaruru was commenced. A contract was placed with the British firm of Armstrong Whitworth in September 1924.

The diversion tunnel was completed in July 1926, and the site dewatered soon after. Good progress was made with the head works, but at the power house site there was disagreement between the contractor and the Public Works Department (PWD) over the suitability of the foundations. The impasse was broken when the PWD took over the works in December 1927.

The works progressed in the face of extensive difficulties, not the least of which was severe flooding. However the first 15 megawatt (MW) unit was put into service in June 1929 and by June 1930, three generators were in service, with work well advanced towards the fourth.

The completion of the power station and dam was an important first step in harnessing the Waikato River for hydro electricity production. This became an important issue in the mid-20th century. A 1947 film, Power from the River, highlights the limitations of the North Island's electricity supply at that time, especially during peak evening hours, and promoted the construction of Waikato River power stations to supplement the supply from Arapuni. Six other stations were constructed as part of the scheme, including Maraetai, the only one with larger capacity than Arapuni.

Early problems and alterations at Arapuni

In mid-1930 a crack developed between the end of the Arapuni Dam's spillway and the adjoining structure. There was a small but definite movement of the ground above the powerhouse – a movement that partly reverted when the spillway water level was drawn down to empty the headrace. The station was shut down and not put back into service until April 1932. 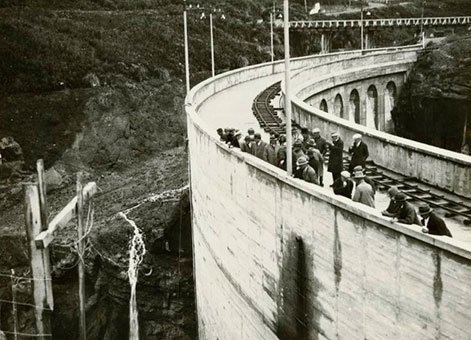 Hydroelectric station at Arapuni, with visiting members from the Society of Engineers (circa 4 November 1930). Alexander Turnbull Library, Wellington New Zealand.

Two Swedish experts, Professor Hornell and Mr Werner, supported by New Zealand geological experts, were engaged and various remedial measures were recommended and carried out, including an impervious lining to the headrace.

A powerhouse extension, doubling the original size, was built between 1934 and 1937, and two more machines installed by February 1938. The final two machines were delayed by wartime disruptions, but were eventually commissioned by October 1946. This brought the station to a total capacity of 164 MW, by far the largest in New Zealand at the time.

Refurbishment in the late 20th century

After half a century of service, the headrace lining showed signs of deterioration and had to be replaced. As this involved a complete station shutdown it afforded an ideal opportunity to upgrade and refurbish the whole operation. Designed by Works and completed by contractor Fletcher Civil Engineering Limited, this $50 million operation took place in two stages.

Stage One of the refurbishment involved the construction of a diversion channel incorporating four radial control gates to enable the full Waikato flow to be diverted away from the Arapuni headrace and intake structure. Stage Two involved the replacement of the headrace lining, channel widening and the raising of the existing intake platform and spillweir. The tailrace was deepened and a radial gate installed to control the tailrace water-level. The new structure resulted in increased flood storage capacity of Arapuni Lake, helping flood control of the Waikato River.

At the same time the powerhouse was refurbished, a new control room was built, and new plant and equipment installed. Arapuni returned to service in 1990 with an expected further 50 years of reliable generation. 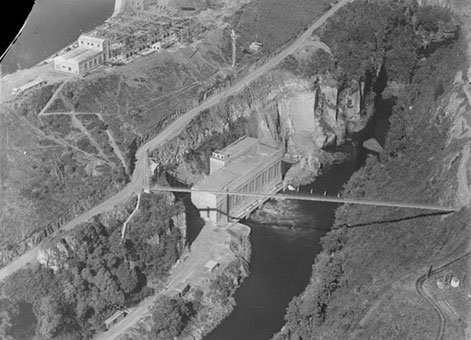 The dam is 64 metres (m) high from its foundations to the roadway running along its crest, and raised the water 42.7 m above its old level. The water then flows about 1.2 kilometres (km) in an open headrace, and then through penstocks to the powerhouse at the base of the gorge. The powerhouse is a reinforced concrete structure 136 m long, 22.8 m wide, and 22 m from tailrace water level to roof.

Eight steel-lined penstocks, each 3.6 m diameter, feed the water from the forebay to the turbines. The eight vertical Francis type turbines have a total capacity of 164 MW. From the main busbars at the outdoor station, power at 110 kilovolts is supplied to the North Island system.

Arapuni, 16 km from Putaruru off State Highway One.